People in the Netherlands who work on topics of war and mass violence often ask me about ‘the War’ (de Oorlog), by which they mean the Second World War, or more precisely, the occupation of the Netherlands during the Second World War. Instead of embarking on the expected story of national victimhood versus guilt, I rather shift the topic a bit: did they know that 100,000s of people from this country had a war experience outside the Netherlands? People who were deported, taken for forced labor, volunteering for the Waffen SS, but also: people trying to flee occupied Europe, organizing resistance activities across borders, taking up arms against fascism after escaping captivity, etcetera. And that this is not only typical for the Netherlands but for people from all occupied territories? The experiences of all these people were not ‘national’ experiences, but transnational. “I never thought of that”, my conversation partners usually say. “You know what?” I respond, “with a team of over 20 researchers from all over Europe, and from the US and Israel, we are actually making a book about such people, focusing on transnational resisters.”

Yes, a book, not a collection of articles and yes, 20+ people from different countries, academic backgrounds and traditions and ideas about resistance against fascism. It was often hard to understand each other. Most of us did not have English as a first language, or even as a second or third language. It took me quite a while before I understood that working on the same topic (in this case the struggle against fascist rule in the 1930s–40s) did not necessarily mean using the same approaches and concepts.

Even if we did use the same concepts and vocabulary, it might turn out that we meant different things. Like that time when we found ourselves in a heated discussion about the aim of the book: while I thought it completely right and obvious to say we aimed for a new perspective and a new history of resistance, some of the colleagues from former communist countries took fierce exception to this. It took us a while to mutually understand what was going on: while the ‘westerners’ saw ‘new perspective’ as (finally!) getting beyond the conventional national histories, the ‘easterners’ associated it with revisionist, nationalist history writing: glorifying the nation, vilifying anyone linked to communism and socialism, and easily forgetting about the Holocaust.

So, how were we to write this book? What could we agree on and how could we transform ourselves to write something none of us had ever conceived before? During the yearly workshops of our network, this was basically what our discussions revolved around. It required a level of trust that we had to build, and a level of openness towards each other that is quite uncommon in academia, and even more uncommon in a large group that only spent three days together once a year.

But it did work. I think because we all wanted it to work. And because we realized we should not wait for trust to ‘be there’ before we could start, but to just start and experience how we were able to work our way through the difficult discussions and conversations and by doing so actually building trust.

It was hard not to make a book about communists. Or Jews. Or ‘forgotten heroes’. Or a book stuffed with 20+ mini national histories squeezed together between two covers. During our 2016 workshop in Belgrade, we reached a shared understanding of the basic framework of the book.

After some wild discussions, we agreed to focus on movement and transformation in the context of war and persecution: people crossing borders, reinventing themselves, taking their previous experiences with them to new places. I remember drawing a matrix on a whiteboard during one of our workshops trying to visualize how we could imagine the people we studied: gathering in Spain to contribute to the fight against Franco, bringing their own skills and motivations from all over Europe and beyond; how this experience in Spain transformed them; being interned in camps in southern France in 1939 and how the experience of being interned transformed them again; how the outbreak of the Second World War and swift occupation of large territories by Nazi Germany mobilized the Spanish veterans and others to form networks of resistance, again bringing in the skills and networks they already had and transforming through resistance work – be it taking on a false identity or learning skills previously inaccessible or deemed impossible because of class, religion or gender. People moving through time, coming together and exchanging and transforming, and again moving on. My probably limited talking and drawing skills left half the group enthusiastic and the other half staring at me with a blank expression in their eyes. But we had the whole evening with drinks and food and a walk through the city to think more about the challenge ahead.

We made it. The book is here about people resisting fascism across the borders of their once home countries, written by scholars who were willing and able to cross their own national and academic borders to come together, work together and change in the process. 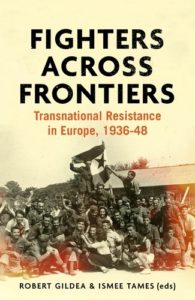 Fighters across frontiers is available to buy now.

Robert Gildea is Professor of Modern History at Worcester College at the University of Oxford.

Ismee Tames is Arq Professor History of Resistance in Times of War and Persecution at Utrecht University, and Programme Leader for War and Society at the NIOD Insitute for War, Holocaust and Genocide Studies in Amsterdam.