How media and conflicts make migrants

There were lots of questions asked in the How media and conflicts make migrants Armchair Event and not enough time to get through them all! The panellists have now answered all the remaining questions below.

With regard to the media analysis, was there any contrasting data (e.g. attempts to historical overviews or discussions about the role of colonialism as one of the causes) and, if so, what were the topics and contexts under discussion?

As part of the background research we looked at historical accounts (for example our second chapter deals with narratives of war), but we did not specifically contrast the newspaper analysis with an additional dataset

Were newspapers with a fairly wide distribution but that position themeselves “above political ideologies” such as the Indepedent in the UK and Il Fatto Quotidiano in Italy also analysed? If not, why not and, if so, were the results from these newspapers in line with the other newspapers?

As for the UK, The Independent wasn’t part of our study. As for Italy, we decided to focus on one “moderate/independent” newspaper, Corriere della Sera, and one “right-wing” newspaper, Libero. Il Fatto quotidiano wasn’t included.

as a Method of Social Science Research:A Detailed Rendering of Memory-Work Method. Available at: http://www.friggahaug.inkrit.de/documents/memorywork-researchguidei7.pdf

Bit of a big question but…I am thinking of how immigration and neoliberalisation started developing hand in hand in Italy in the 90s. As this stigmatisation of migrants ultimately can aid the government in finding scapegoats for the mishandling of the economic crisis…I guess it is unlikely that structured efforts to challenge discrimination will come from the Italian government anytime soon. I am aware that there is a dedicated National Anti-Racial Discrimination Office (UNAR) but their efforts seem to be half-hearted and also they are not an independent organisation (but part of the government). How do you think institution can be held accountable for their lack of willingness to challenge racist discourses and negative stereotypes?

We entirely agree with the analysis, including the limitations of UNAR. Strict immigration controls (linked to racist attitudes) have a broad consensus: the new (centre-left) government is not abrogating the “security laws” passed by the previous (centre-right and rightwing coalition government. Therefore the only realistic means to obtain a significant change in the policies and behaviours of institutions is through social mobilisations “from below”. There are many migrant-led movements in Italy, although they are very locally based and not very interconnected, and with no big political parties supporting them. There are also coalitions of NGOs and trade unions which are campaigning for structural reform of immigration and asylum laws. The economic crisis caused by the pandemic and the lockdown will likely excacerbate social conflict and xenophobia.

In light of this discussion, how should ethnographers conduct study with/on displacement? Are there methods/practices/tools that you recommend to encourage participation and engagement? My experience in working in that area is that not everyone/very few people want to be activists on top of going through the violence of the asylum process.

We acknowledge that many asylum seekers might feel uncomfortable exposing themselves because they are concerned it might affect the decision on their applications, or that they might be repercussions for their families. Therefore informed consent is very important, and only involving people in a way that they feel comfortable. That said, it’s also important to encourage people to express their opinions and views – beyond simply talking about their individual personal experiences, and to give them some ownership over the process. Because of this, regular and open communication is important, as well as bringing a collaborative approach to working with refugee organisations. We’ve also noticed that there tends to be a top-down approach to working with refugees within certain aspects of the voluntary sector, where support is provided but there is very little agency or voice, and so because of this it’s important to carefully consider which organisations to work with. In approaching interviews, we think it’s important to reflexively consider what questions are asked – are we asking people to only talk about their migration journey or about other things? Our partners were self – organised migrant groups, and were selected for this reason. They had goals that aligned with project. We felt it important that the project support their efforts to build power and possibility.

Hey Kirsten. Good to see you. I had a question about the use of theatre as a research method but I have to go to another meeting. Congratulations to all of you. I look forward to reading the book and hopefully see you soon even if only virtually.

We used theatre as a method of co-research. In keeping with early practices of particpatory action research, we understood the theatre dimension of the project as reflection, analysis and action into the problematics that the other aspects of the research highlighted. Groups set the agenda for this dimension of the research which looked at both the possibilites for sharing ‘stories’ as a mode of navigating the immigration system as well as researching strategies for building other narratives and orientations to the story by implicating those who have not been constructed as migrant, and to question white amnesia amongst those with experiences of white privilege. These were very much research prototypes. At the same the theatre work also activated earlier dimensions of the research, using interview material and ‘images’ generated through the Critical Memory-workshops. 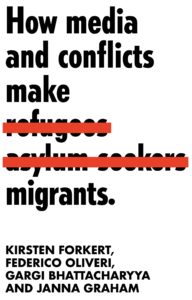 How media and conflicts make migrants is available to buy now.

The panellists at this event were:

Kirsten Forkert Associate Director for the Birmingham Centre for Media and Cultural Research at BCU
Federico Oliveri is Research Fellow at the University of Pisa
Janna Graham is Lecturer in Visual Cultures at Goldsmiths, University of London
Victoria Mponda is an organiser, facilitator and founding member of the Global Sistaz United collective in Nottingham

How media and conflicts make migrants