A fascinating insight into the history and design of the ordinary interwar suburban semi.

I have been influenced by several books that present biographies of houses fused with personal memoir, notably Julie Myerson’s Home: The Story of Everyone Who Ever Lived in Our House (2005), Rosa Ainley’s 2 Ennerdale Drive: An Unauthorised Biography (2011) and Margaret Forster’s My Life in Houses (2014).  I was also inspired by Akiko Busch’s Geography of Home: Writings on Where We Live (1999) and Ben Highmore’s The Great Indoors: At Home in the Modern British House (2014) because of their fusion of historical and sociological observations on the design and use of the twentieth century home with the authors’ own experiences. The style of writing of these books – lucid, engaging and accessible to non-academic audiences – was also important to me.

The most unexpected place my research took me was, in some ways, the most obvious and also the most personal. After I had written the first draft of the introduction, with which I was not happy, I kept returning to a throwaway comment I had made about my personal experience of an interwar house that I purchased in 1995. Built in 1934, the house had all its original decorations and furnishings intact. I realised that my experience of renovating this house with my husband (which by the time we had finished friends joked we should have donated to the National Trust) had profoundly affected my understanding of the material culture of the interwar home. So I abandoned what I had written and started anew with an account of viewing the house for the first time, which I used to frame the book.

I write on a computer, with a combination of typing and dictation. I often read my work aloud to myself as I find it really helps with clarity.

It came out of conversations with the Studies in Design and Material Culture series editor Chris Breward, with whom I was very keen to work as a fan of his research and because he was open to the cultural approach I wanted to take to design history. We imagined my book in the first instance as a counterpart to Helen Long’s The Edwardian House. It was also very important to me to have the opportunity for a large amount of illustrations, especially in colour.

I’m working on a history of the design of the kitchen in the West, from 1850 to the present and into the future. I’ve also been writing about the British Government’s communal ‘British Restaurants’ in World War 2 that were set up to feed the nation with good quality nutritious food.

You’ll get there in the end! Life got in the way of writing this book, which coincided with a period of many years of working part-time, firstly by choice to spend time with my young family and then later due to serious ill health. There were long periods when I was not able to work on the book at all. I also changed jobs four times and moved house three times. And I faced the challenge of being located in Belfast and later in Cornwall, far away from my primary sources. It was a stop-start process.

The late Judy Attfield’s Bringing Modernity Home: Writings on Popular Design and Material Culture (Manchester University Press, 2007) is a posthumously published collection of her articles. I got to know Judy when I worked in the V&A’s Archive of Art and Design in the late 1980s when she was doing her doctoral research on J. Clarke, High Wycombe furniture manufacturer. Her research opened up the space for writing on everyday design, especially that which doesn’t conform to ideas of ‘good design’, from a  feminist perspective and has been a huge influence on me. This collection also includes my favourite ever title: ‘The tufted carpet in Britain: its rise from the bottom of the pile’!

I read a lot of biography and recently enjoyed Craig Brown’s Ma’am Darling: 99 Glimpses of Princess Margaret for its high camp and gossip and have just started Julie Summer’s Dressed for War: The Story of Audrey Withers, Vogue editor extraordinaire from the Blitz to the Swinging Sixties. I also like novels where houses are at the centre of the story, such as Sarah Waters’ The Little Stranger. And I’m partial to a noir-esque mystery, especially Sara Sheridan’s wonderfully evocative Mirabelle Bevan series set in postwar Brighton. 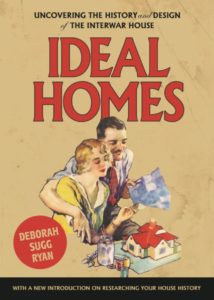 Ideal homes is available to buy now! Deborah Sugg Ryan is a historian, author and contributor for BBC Two’s A House Through Time. A former V&A curator, she is a specialist in the history of housing, interiors, products and everyday life and has appeared on BBC Two’s Inside the Factory, Business Boomers; More 4’s David Jason’s History of British Inventions and Channel 4’s No 57: The Story of a House, Heaven, Hell or Suburbia. Deborah is Professor of Design History and Theory at University of Portsmouth and a Fellow of the Royal Historical Society. Read a sample chapter, here.