Essential work is often ­­­taken-for-granted, invisible and undervalued. This applies to unpaid work at home, as much as to low-paid work by people harvesting fruit and vegetable crops, processing food in factories, or picking, packing and delivering goods from distribution centres. The global pandemic and associated lockdown have changed that. There is greater appreciation and recognition by people not doing such labour of their reliance on the work of the people who do it. Yet while food is still being produced, processed, packed, and is, along with many other goods, being distributed and sold, the lives of the key workers involved have been put at risk by the callous indifference of some employers and governments. When workers in the United States organised protests for safe working conditions, some companies, such as Amazon, sought to identify and go after ringleaders rather than make the changes being demanded.

One key demand in the US protests is for work to be slowed down: that the pace of work required in giant distribution warehouses is too great for safe distancing and hygiene rules to be followed. Increased pace forced by digitalization, ever-rising performance targets, associated sanctions and often harsh management and supervision practices are typical of giant warehouse workplaces in North America, Europe and elsewhere. Canada-based geographer Emily Reid-Musson refers to ‘intimate and predatory forms of exploitation’ and ‘management through algorithms… in logistics and transportation in particular’. Even before the COVID-19 lockdowns around the world, other researchers argued that storage and warehousing operations are ‘at the heart of global capitalism.’ Located on main transport arteries and with a long history of temporary agency employment for local agricultural and food packing and processing work, the small city of Peterborough in England has become a major logistics hub, with massive warehouses dotted around parts of its perimeter. I came to know many people with intimate experience of working in the city’s warehouses during eight years of research in Peterborough in the 2010s. They described the ratcheting up of the intensity of work and management indifference to health and safety in vivid, often angry terms. In a recent MUP Armchair Event now available online I discussed some of the stories I listened to about working in warehouses and about life in the city. Many of the people involved in warehouse work in Peterborough in recent years are international migrants to the UK, including large numbers of EU nationals. In my new book Stories from a migrant city: living and working together in the shadow of Brexit, I also explore ways that intensive work in warehouses sometimes brought about collective resistance among the multi-ethnic, multi-lingual and multi-national workforces there.

Such a push in adversity towards moments of unity across difference coexisted and was entangled with ongoing racism in the city, as in England as a whole. People seen as ‘migrants’ experienced the continuation and exacerbation of wider structures of racism with histories stretching back to slavery and colonialism. This apparent contradiction is what sociologist Les Back calls a metropolitan paradox and it has resonance with the experience of the COVID-19 pandemic. In the UK, the grossly disproportionate number of deaths among racialised people has rightly been argued to be the result of historical structures of racism.  Racialised minorities face greater risk of dying from coronavirus because they are more likely than white British people to experience poverty, overcrowded housing and employment in risky key work occupations. Similar processes are at work across many countries. At the same time, a greater awareness of common humanity in terms of frailty, vulnerability to illness and mortality has also resulted. In the book I argue for the power of exchanging stories to enhance such awareness. People can come see each other in less binary terms, such as ‘local’ or ‘migrant’ through listening to each others’ tales of residential movement or staying put or a combination of these across a lifetime (and the degrees to which these were chosen or enforced by others). This can help to counter the tendency of some governments to construct certain groups or people as outsiders, denigrating them as being to blame for the world’s ills. Instead it can open up the more hopeful possibility of unity in struggles against racism, class and gender inequality, and catastrophic climate change.

Stories from a migrant city draws on the stories of both white people and racialised minorities, and both new arrivals and long-standing residents, to counter the argument widely used in sections of the media and by leading politicians of the main British political parties that cosmopolitanism is something necessarily associated with elites. Notwithstanding the role of some elites in promoting nationalism and nativism, the focus of the book is on the entanglement of conviviality, of being at ease with difference, among working-class and other non-elite people in everyday situations that are also infused with racisms and racialised hierarchies. It draws on the stories of white British people who migrated to the city from ­London during the New Town era in the 1970s and 1980s and, by centring their residential moves alongside the localness of some of the racialised British people in the book, shows how the standard categories of recent bitterly divisive debates over immigration can break down. As the late Doreen Massey emphasised, what places stand for, and to whom they belong are subject to both change and contestation. It is my hope that Stories from a Migrant City, through drawing on the biographies of people currently – at the time of COVID-19 – recognised as key workers, will contribute to the envisioning of a post-pandemic England that is driven less by establishment perspectives, including a tendency to divide and rule, and instead a greater valuing of (including higher pay and safer working conditions for) the people on whom continuing life literally depends. 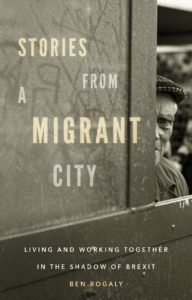 To claim 50% off Stories from a migrant city add STORIES50 at the checkout.

Ben Rogaly teaches in the Department of Geography at the University of Sussex.

Stories from a migrant city