Penguin Books and the Meritocracy Trap

In late March, we all retreated into our homes to seek refuge from a virus that has reshaped our everyday lives. We also confronted some uncomfortable truths. Suddenly, we were compelled to acknowledge that so many of the jobs that keep our society running are rewarded with relatively low pay. NHS staff, delivery drivers and supermarket workers were now ‘key workers’ who we depended upon to keep us safe and to supply us with essential goods and services. Yet the rewards they were receiving seemed to be disproportionate to the risks they were undertaking. How, many of us asked, had we arrived at a situation where such important work seemed to be given so little status? As a historian, I think the past can help us to answer these kinds of questions, and my new book, Penguin Books and Political Change, helps to shed light on the issues that they raise.

As the title suggests, it is a book about books. By exploring a series of non-fiction paperbacks produced by the publisher Penguin, it traces the social and political thought of those intellectuals and policy-makers who helped to shape Britain in the twentieth-century. In doing so, it tells a story about the rise and fall of what we might call Britain’s ‘meritocratic moment’. From the 1930s, I argue, thinkers from across the political spectrum began to construct a new consensus in relation to some key political questions. They continued to disagree with each other about all manner of things, but they shared the belief that giving all individuals an equal opportunity to develop their skills and talents should be a priority. That was, in part, because they believed that a more meritocratic society would also be a more efficient one. Social mobility and economic growth, they assumed, would usher in a more harmonious future. But the promise of meritocracy was never realised. The arrival of comprehensive schooling may have removed some barriers to educational attainment. Yet it did little to remove the broader social inequalities that reinforced class distinctions. And by the early-1970s, as governments tried to come to terms with a series of economic crises, Penguin’s non-fiction books reflected a widespread disenchantment with the logic of meritocracy. Feminist authors drew attention to the discrimination that women faced as they attempted to enter the world of work; progressive educationalists railed against the idea that an IQ test could determine a child’s worth; and sociologists showed that the race to climb the social ladder hardened inequalities of wealth. Penguin’s pocket-sized paperbacks exposed the crisis of the meritocracy.

In many ways, our current debates about key workers reflect the failure of successive generations of policy-makers to resolve the crisis that these authors drew attention to four decades ago. Thatcherism, New Labour and the Clegg-Cameron coalition all launched different initiatives to try and resolve the crisis of the meritocracy. Thatcher tried to make ordinary workers into popular capitalists; Blair expanded Britain’s university sector, and Cameron talked of the ‘Big Society’. But none of these projects resolved the basic problem that Penguin’s authors exposed in the 1970s. As long as rewards were to be determined by the scarcity of an individual’s skill or talent, that reward had no necessary relationship with its social use. Only by challenging the logic of market liberalism could the moral and social value of work be adequately rewarded.

What lesson does my story have for us as we confront the challenges posed by Covid-19? Most importantly, it tells us that we are unlikely to usher in a more equal society if we appeal to the promise of meritocracy. Meritocratic policies might help some to climb the ladder, and they tend to resonate with popular ideas about fairness. But they also justify unequal outcomes. If we want to resolve the inequalities that have been exposed by Covid-19, we need to rethink the way we define concepts like equality. Are we content to level the playing field and give individuals the equal opportunity to be unequal? Or do we want to move towards a situation where the gap between the rich and poor is significantly narrowed? As we ponder these questions, we might want to look back to some of the books that Penguin helped to popularise at earlier moments in our history. Penguin editions of R.H. Tawney’s The Acquisitive Society or Michael Young’s The Rise of the Meritocracy are now increasingly difficult to come by, but the ideas contained within them may still have considerable value for us as we chart a course out of the current crisis. They remind us that education can be more than simply a sorting process to distinguish the skilled from the unskilled. And they tell us that meaningful equality requires fellowship rather than competition. 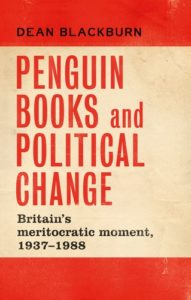 Dean Blackburn is a Lecturer in Modern British History at the University of Nottingham.