Performance art in Eastern Europe since 1960

The story of this book is the story of relationships, and of human beings. It tells the story of groups of artists across the former communist region of Central and Eastern Europe who developed experimental art forms, most notably performance, among close groups of friends, since that type of work would not have been acknowledged (and in some case tolerated) by local governments. My research revisited those informal networks of artists, as it was conducted over hundreds of coffees, a few beers, several meals, and a number of adventures. It was, without a doubt, a performance in and of itself, and what it produced was not just a tome capturing only a fraction of that interaction, but a network of friendship, relationships and kindred spirits across the region. To say that it was a labour of love is an understatement.

Just like Blanche DuBois, in order to create this book I had to depend on the kindness of strangers. This kindness would often start in response to an unsolicited email: “My name is Amy Bryzgel and I am writing a book on performance art in Eastern Europe….would you be willing to meet me?” What followed was the weaving of a network in various cities across the region, as the first person I met introduced me to the next and the next and the next. I arrived in a country or city with an empty datebook, and by the time I left the calendar was dotted wi 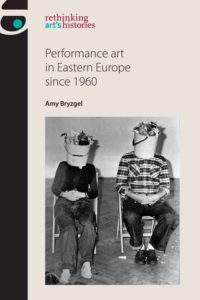 th meetings so close together there was barely time to eat or breathe between them—hence the fact that many took place in conjunction with some kind of food or beverage. In the Balkans, during the height of summer, these meetings often took place in the early hours of the morning or in the late hours of the evening—in the afternoons the temperature rose so high above body temperature that all anyone could do was sleep. In the Baltics, in the winter, these meetings sometimes took place without heat, if the city hadn’t turned the services on yet.

One of my more unusual meetings took place on a child’s playground, in the rain. We started by sitting on a bench under my umbrella, the artist holding it for me so I could write. We ended sitting under the canopy of a jungle gym, an unsuspecting mother next to us, eavesdropping, captivated by the discussion of sexual politics in art and the unusual juxtaposition of the playground.

And then there was the time I was invited to the home of an artist for dinner. While we discussed a performance in which he drank his own urine, I wondered at the amber beverage placed before me. Thankfully, it was beer.

I was often surprised by the fact that it was often the artists who did the most extreme body art performances who were the kindest and gentlest souls, like this urinator, or the man who used the leftovers from plastic surgery to make an aspic for visitors of his exhibition to eat, or the man who ran around barking at people like a dog, even biting them. These people are now my friends, and I understand why they do what they do—there is such a depth of expression and sensitivity to them, that it naturally comes out in the most extreme forms.

There were missed meetings, sometimes easy to remedy, with a text or phone call, and sometimes less so—as it turned out the artist was in a completely different country when I showed up to meet them!

And there were piles and piles and piles of books and texts and photographs and videos and materials that the artists kindly shared with me, that museums and gallerists gifted me, all of which pushed the bounds of my baggage allowance to the absolutely limits (thank you, portable luggage scale!), but ended up being priceless when I sat down in the Northeast of Scotland to write the book, miles away from my subjects.

There were difficult times as well, like when I was called “naïve” by an artist, or told that I would never manage to produce such a book, or condescended to by those who couldn’t bother to help a colleague in the field. But these experiences were few and far between.

The story of this book is the story of humanity, of individuals who welcome a complete stranger into their home for no reason other than one expresses an interest in the other, and that other takes a risk that that person will be kind and trustworthy. You might think they did so because they wanted to be included in the book, but in the course of several years and several hundred meetings I didn’t meet a single person whom I felt was meeting me just to curry favour. I believe they met with me because of art, because they love what they do and want to share it with anyone who will listen, and because they know that I love art too, and this is something you can only know when you meet a person and spend several hours talking to them in their home. It may sound romantic and twee, but at the end of the day, this book could not have been written without the people and the relationships behind it. In a sense that mirrors precisely the way that performance art developed in the region under communism, with events spreading by word of mouth, performances taking place among small groups of trusted friends, and samizdat texts being circulated among colleagues. The forces compelling artists to function in that way may have disappeared (at least for the most part), but the importance of human relationships remain. And it is those relationships upon which this book was built.

Performance art in Eastern Europe since 1960
By Amy Bryzgel