Never did the slums look so pretty, as if already perceived through the eyes of the protagonist after winning millions (of rupees) at the fictional TV quiz programme. Not only are all the children and teenagers gorgeous looking but the constantly imaginative camera work never allows us to think about the real living conditions of the Mumbai underworld, purportedly what the story is about. This is the quintessential feel-good movie: in one of the best touches, a couple of larger-than-life U.S. tourists give the protagonist a 100$ tip after their car has been wrecked by the boy’s friends. It is also a gorgeous-looking one: almost every shot is “spectacular”, employing expressive cinematography, from extreme close-ups of pretty faces to constant high- and low-angle shots, including frequent overhead shots, more canted shots than The Third Man, rhythmic editing, stop motion, graphic matches, wide angles, shallow focus close-ups with artistically fuzzy backgrounds and all the tricks of the visual trade, not to mention the lively “authentic” soundtrack. Even Jamal and Salim’s mother looks stunning in her green sari when she is clubbed to death by wild demonstrators at the beginning of the story, and nobody is very bothered when Jamal approaches the Bollywood star for an autograph covered in shit. It’s all fun, fun, fun. We get frequent glimpses of the dire living conditions of the children and those around them but we are never allowed to feel queasy about them, nor do we bother much about Jamal being tortured at the police station for no very clear reason. Having said this, Danny Boyle’s breathless storytelling, dazzling cinematography and careful narrative construction, based as it is on a very gimmicky flashback structure – each successive question Jamal gets at the quiz show takes him and us back to an important episode in his life (such luck at a quiz program was never seen before) –, make for a very uplifting movie with a very timely message in times of crisis: resilience, love and spiritual strength will eventually win the day. However, the most important message of Slumdog Millionaire is in the medium. On the surface comparable to the visual virtuosity of contemporary filmmakers like Wong Kar-wai, Alejandro González Iñárritu or Pedro Almodóvar, Boyle’s film mesmerizes us with its spectacular images but hides nothing underneath them, no secret meanings, no interpretation, please. For this reason the absolute best and most representative scene of the movie is the final credit sequence with the Bollywood-like dance at the railway station, where everybody joins in the celebration of the never-doubted and not particularly exciting final reunion of the young lovers. Here the film is probably being totally honest for the first time, assuaging our fears that there might have been some degree of social concern behind its stylistic pyrotechnics, and showing itself for what it is: a celebration of the affirmative potential of popular art and of the visual sophistication of contemporary cinema. 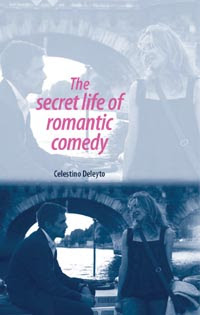 The secret life of romantic comedy offers a fresh approach to one of the most popular Hollywood genres in recent years and analyses the cultural impact of generic conventions in the construction of issues of intimacy and sexuality.

The combination of theory and analysis will help upper level students and academics in Film Studies, Cultural Studies and Literary Theory put theory into practice.
For more info, visit our website manchesteruniversitypress.co.uk.
To order your copy, email [email protected]