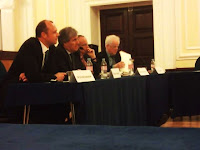 The official launch of New Labour and the European Union was hosted by the Federal Trust in London on 7 April 2011. It was held in Mary Sumner House, off Tufton Street in Westminster, conveniently – given the subject matter – not far from Parliament, Downing Street and Whitehall. Around 50 people were in attendance, including academics, diplomats, business people, journalists, former New Labour advisers and members of think-tanks. MUP’s Tony Mason kindly came along to man the book stall, and the day proceeded very smoothly thanks to the hard work of everyone at the Federal Trust.

The launch involved three presentations followed by forty five minutes’ worth of questions and discussion, with a wine reception. In the first presentation Oliver Daddow outlined the central arguments in the book: that New Labour failed to convert the British people to the idea of a European future; that the Blair and Brown governments were operating in a largely hostile and Eurosceptical media and public opinion context after 1997; but that they could, nonetheless, have done a lot more through their information campaign on Europe to shift public opinion. This was yet another ‘missed opportunity’ for British European policy.
Following this outline of the book as a whole, the audience was treated to two commentaries on the book from invited commentators. The second speaker was Sir Stephen Wall, former UK Representative to the EU and Blair’s European adviser; the third speaker was Rt Hon Lord Radice, another to have worked closely with the government on European issues. Both gave insider recollections of key policy decisions and challenges from the time and, in the main, supported the crux of the book- that Blair and Brown did not live up to their early promise to construct a ‘pro-European’ consensus about the EU in Britain.
The commentaries and questions that followed centred on five principle issues:
First, was this a loss of nerve or a failure of leadership? A profound irony was noted, that New Labour inserted the word ‘lead’ and ‘leadership’ into almost every foreign policy speech, but on difficult issues such as the Europe question the government seemed incapable of demonstrating any sustained or convincing leadership at all. 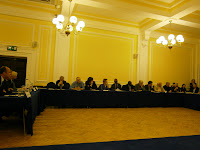 Second, the influence of the Eurosceptical press was well covered, notably the influence of Rupert Murdoch’s newspaper outlets. New Labour was stuck from the beginning in many ways because Murdoch supported Blair as leader but was equally hostile to the EU; meanwhile, the British public might have liked New Labour more than the Conservatives, but it was more appreciative of ‘Old Britain’. Neither Blair nor Brown had the ability or, as time progressed, the willingness, to alter these perceptions by uprooting established traditions of thinking about the nation’s role in the world.
Third, what place did referenda have in uprooting New Labour’s early intentions for its European policy, and what kind of referendum might have succeeded in putting the Europe issue to rest? Pledging a referendum but never holding one demonstrated a failure of leadership, and opened the way for a concerted referendum campaign on the part of the sceptical press, which exacerbated the government’s hesitancy to hold one- on the single currency or the Lisbon Treaty.
Fourth, Brown’s period at the Treasury effectively saw him wrest control over European policy from Blair very early on, via the announcement of the Treasury’s ‘five tests’ on euro membership in October 1997. This was, it seems, another example of Blair not demonstrating the level of far-sighted leadership required to keep momentum behind the ‘pro’ campaign, whatever the odd speech he made to the contrary. High hopes for the launch of the Britain in Europe in 1999 were just as quickly dashed, while the tests were used to delay having to make a firm decision on the single currency.
Finally, many participants remarked on the use British politicians make of ‘Europe’ as a political football. It is an issue that provides many examples of parties positioning themselves for best gain at the polls (Europe as a modernizing strategy for the Labour Party after the debacle of the 1980s, for example). Examples of ‘Europe’ being the principled pursuit of politicians are far fewer. By contrast, Europe has tended to be used by British foreign policy decision-makers as a prop to some rather dated global ambitions. In this regard, Blair, Brown and New Labour echoed tendencies going back as far as Churchill and before.
We learn from this book, and the vibrant launch discussions, that if Blair and Brown had not promised such a radical departure from previous practices perhaps we might not be so critical of the government’s European policy. But New Labour did make such promises, so it is well worth looking to the pre-Iraq New Labour as a way of holding former ministers to account for this sadly familiar European policy outcome.