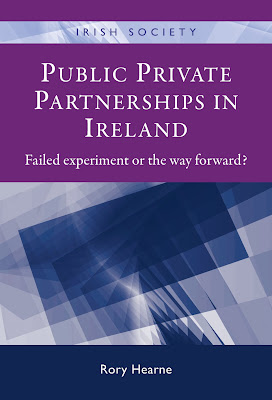 My recently published book Public Private Partnerships in Ireland emerged from research I had been doing as part of my PhD in Trinity College. I was investigating the impacts of globalisation on lower income populations and came across literature (Harvey, Monbiot, Stiglitz) that was critical of the impact of the neoliberal policies of privatisation. While high profile privatisations of state run services and infrastructure such as water and transport had been researched there was the emergence of a critical body of work that focused on a hybrid type privatisation that was being implemented as part of a ‘third way’ approach. These Public Private Partnerships, or Private Finance Initiatives, as they are known in the UK, were first implemented in the early 1990s in Britain and since then came to be adopted by Governments across the world. These were introduced as a new method of service and infrastructure delivery that involved a partnership between the state and the private sector. They would, their supporters stated, introduce the efficiencies of the private sector into public service delivery, transfer the risk of projects running into problems over to the private sector, and obtain greater finance for investment in public infrastructure and services. However, problems arose for all stakeholders -the service users, public sector providers and private companies in the PFI projects in the UK. The outcomes of some of these projects are detailed by authors such as Pollock and Monbiot.

PPPs were only being introduced in Ireland in the early 2000s, and as a result, little research had been undertaken into their outcomes by the time I was doing my research. Given the international outcomes and their potential social implications I decided to analyse a number of the PPP projects in Ireland to see whether similar trends were emerging as in the UK and other countries. I wanted to find out how effective they really were, who was benefitting and whether they were having a transformative impact on the role of the welfare state and lower income populations in Ireland. As a student of geography in Trinity College I had covered topics such as housing markets, social housing, urban planning, theories of the state, social policy, globalisation, economic development, and various political economy approaches. These provided me with a grounding for theorising and analysing this new form of public service and infrastructure delivery on both a micro-project and macro-political-economy level. The economic boom of the Celtic Tiger period in Ireland (1996-2008) meant there was little traction for critical intellectual analysis of social and economic policy and trends. The concepts of market failure were downplayed and ignored by the Irish state. When the inevitable bust came it was the poorest sections of society that were most impacted by the market failure within PPPs. This is detailed in my chapter on the Regeneration of Social Housing Estates. The book also details the critical role that infrastructure plays in economic growth and societal development. Spending reductions in the 1980s in Ireland in health, transport, housing and education had long term negative consequences that emerged in the boom when the infrastructure could not cope with the level of population and economic growth. It appears, however that the lessons of this period are being forgotten as the austerity plans of the current Government which have involved radical reductions in levels of public capital infrastructure investment. My book shows, however, that the critical social and economic infrastructure deficits are potential employment and growth opportunities.

Overall then the book and my research does point to the downsides of this PPP form of privatisation. In some instances, the commercial providers cut corners to boost their returns to shareholders. Disputes between public and private service providers arose over the implementation of the contract covering the delivery of the services and infrastructure. These were lengthy and resulted in a significant cost to the exchequer and the private companies. Reform of public service delivery is required to make services more accountable and effective in meeting social and economic need. However, the outcomes of PPPs as a model of reform suggest that caution should be exercised towards further roll out. Other models such as non-profit making and voluntary organisations being involved in public partnerships should be investigated and could offer more favourable outcomes.

The process of writing the book was a difficult one at times but I was motivated by a hope that highlighting these issues would help improve the effectiveness of public services as key components of creating a more sustainable, equitable and efficient social, economic and political landscape. The review and editing process was hard work but thanks to all in MUP for the support in getting it ‘over the line’, so to speak!