Adrian Jackson, a writer and director, who set up the theatre company Cardboard Citizens, appeared on the BBC’s Midweek programme this morning. He discussed his latest play, A Few Man Fridays, which tells the story of how the British Government evicted 2000 islanders from the Chagos islands in the Indian Ocean during the cold war to make way for a US military base. 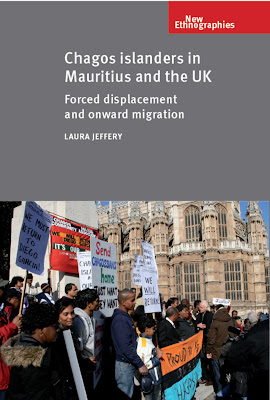 Those interested in the forced displacement and onward migration of Chagos islanders, will find Laura Jeffery’s book Chagos islanders in Mauritius and the UK of great interest. Based on in-depth ethnographic fieldwork in Mauritius and Crawley (West Sussex), the six chapters explore Chagossians’ challenging lives in Mauritius, the mobilisation of the community, reformulations of the homeland, the politics of culture in exile, onward migration to Crawley, and attempts to make a home in successive locations. Jeffery illuminates how displaced people romanticise their homeland through an exploration of changing representations of the Chagos Archipelago in song lyrics.

Adrian Jackson’s interview on Midweek can be listened to again on iPlayer.

A review of A Few Man Fridays can be found here.