As England prepare to kick off their Euro 2012 campaign, the tournament is becoming increasingly overshadowed by racist and violent behaviour by a small number of fans. Geoff Pearson, author of An ethnography of English football fans, published by MUP later this summer, considers ‘why does football attract this type of anti-social behaviour?’
By Geoff Pearson 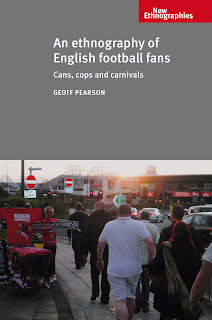 In the build up to the 2012 UEFA European Football Championship, the issue of football crowd racism has been high on the media agenda. Images of Polish and Ukrainian fans chanting racial insults, performing Nazi salutes and on one occasion engaging in racist violence were broadcast in a rather sensationalised edition of BBC 1’s Panorama, leading to debates about what action players and referees should take in the event of racist chanting at Euro2012 matches.
Expressions of racism by spectators at football matches was one area that I looked at during my 15-year ethnographic study of the behaviour of English football fans. From 1995 to 2010 I followed fans of Blackpool, Manchester United and the England national team, spending over 2,000 hours ‘in the field’. As Clifford Geertz warns us, ethnography is invariably microscopic in nature, and ethnographers must therefore be careful about making sweeping generalisations based on their research, which is inevitably only a piece of a much larger jigsaw of cultural behaviour. My research only focussed on a specific sub-culture of fans, supporting three clubs, in one nation, so it cannot claim to be necessarily representative of how all football fans behave.
However, in terms of attitudes to racism, a common theme was identified across all three clubs for the duration of my research. This was that expressions of racism from football fans were largely determined by context rather than by a disposition of football fans towards that type of behaviour or those type of views. I found nothing to suggest that football fans were inherently more racist in attitude than non-football fans, or that football matches were magnets for racists or extremist political groups. I observed a number of incidents of racist chanting, but these took place only in specific contexts at certain times; for the vast majority of matches, racist chanting or abuse was not apparent.
For example, at Blackpool (between 1995 and 1999) racist chanting occurred that was widespread in terms of participants, but which only took place at a handful of matches a season, was only directed against one specific ethnic minority, and (with one exception) only against two clubs (both local rivals). And yet the fans chanting these songs refrained from engaging in this form of abuse for the rest of the season. With England (1998-2006), racist chants were engaged in by a minority at most match events, but only in specific geographical contexts – mainly pubs and bars and (again with one exception), not in the stadiums themselves. At Manchester United (2001-2010), racist chants were almost unheard of either inside or outside the stadium, and yet some of the fans with whom I carried out this research had racist views and expressed racist sentiments in other contexts.
What seemed to be happening at all three clubs was a form of (usually unspoken) self-policing. Most fans who might express racist views at home, in the workplace or in the pub, simply did not feel comfortable expressing these at football matches, where so much work has been done by groups such as Kick It Out, to make racist chanting seem unacceptable. If the scenes from Poland and Ukraine are typical of domestic football there (and many commentators from those countries suggest otherwise), then what we are seeing is the opposite – that fans with racist standpoints perceive football stadiums to be acceptable socio-geographic contexts in which these views can be expressed without fear of censure from the spectators around them. Of course in the UK, legislative action combined with improved stadium infrastructure and CCTV has also assisted in making football grounds largely free of racist abuse, but this did not stop some of the incidents observed in my research, and my conclusion remains that it is self-policing by the fans that has been most significant in dealing with the phenomenon.
There is therefore no easy solution for the Polish and Ukrainian authorities in dealing with racism in their domestic football (whether any racism occurs in Euro2012 stadiums is less certain), but the English experience hopefully demonstrates that it is possible to manage racism in football grounds without somehow excluding all those who have racist views or fundamentally changing entrenched social prejudices. Football is not an equality-friendly pursuit; the teams that the fans at Euro2012 will be supporting will consist of players who are all able-bodied, all male, and all of a particular nationality, often as they play out historical political, religious, or economic antagonisms. There is no room for complacency, and in the case of nations like Poland and Ukraine serious improvement is clearly required if racist abuse in their domestic game is to be controlled. However the fact that the vast majority – if not all – of the European Championship games this year will pass off without any serious racist abuse is something that should be celebrated.
Dr Geoff Pearsonis a Lecturer at the University of Liverpool’s Management School, and co-chair of the 2012 Ethnography Symposium.

His second book, ‘An Ethnography of English Football Fans: Cans, Cops and Carnivals’ is published by Manchester University Press in July.