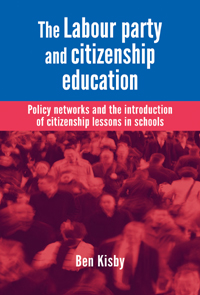 A decade on since citizenship lessons became compulsory in English secondary schools, work by a University of Lincoln academic suggests the under-threat subject could still help to address young people’s dwindling faith in formal politics.

Dr Ben Kisby, lecturer in Politics at the University of Lincoln, analyses why and how the previous Labour government introduced citizenship into the National Curriculum in 2002 in his recent book The Labour Party and Citizenship Education.

Based on interviews with the key figures behind this landmark policy change, including former Education Secretary David Blunkett MP and Chair of the Advisory Group on Citizenship, the late Professor Sir Bernard Crick, plus a wide range of primary and secondary sources, the book describes how citizenship lessons were introduced principally because of concerns held within and beyond the Labour government about levels of ‘social capital’ in Britain; worries about levels of civic cohesion and social trust amongst citizens.

Dr Kisby draws parallels between the Labour government’s policy agenda on social inclusion between 1997 and 2010 and the current Conservative-led Coalition’s Big Society initiative, with its core themes of empowering communities, redistributing power and promoting a culture of volunteering.

Despite these similarities, the future of citizenship education in England is currently uncertain. The Curriculum Review Panel set up by the Coalition government has recommended that citizenship is removed as a core Foundation Subject of the National Curriculum.

Dr Kisby argues that removing Citizenship as a compulsory National Curriculum subject would be a mistake.

He said: “‘Whilst citizenship education is certainly not a panacea to address the problem of political disengagement in the UK, there is good evidence that citizenship lessons do have a positive impact on pupil engagement in society, in terms of increased civic and political participation. As such, far from removing Citizenship as a compulsory subject in the National Curriculum, what is instead needed is a strengthening of the role of Citizenship education, through a greater focus on political literacy. It should be accorded a higher status, and given more resources and greater numbers of specialist staff to teach it.”

Dr Kisby commented that disengagement from mainstream politics in the UK, such as low levels of turnout in elections, membership of political parties and trust in the political class, are very pronounced in historic terms, particularly amongst young people.

He added: “It is important that such disengagement is not seen solely in terms of a problem of citizens’ attitudes. It also relates to the kinds of politics on offer by parties. There is too much mudslinging by politicians, despite or perhaps because of the fact that there has been a substantial degree of policy convergence between the major parties over the past couple of decades.
“The evidence suggests that young people are not politically apathetic; they have their own views and engage in democratic politics in various ways. However, they have become increasingly alienated from electoral politics.
“Many young people have very negative attitudes towards politicians, have been disappointed by their experiences of formal politics and have only moderate levels of political efficacy.
“This can be addressed by both changes to the way formal politics is practiced, with a greater focus by politicians on engaging with young people and their concerns, and through strengthening provision of citizenship education so as to help young people make sense of a complex political world.”