A press release announcing the launch of Defectors and the Liberal Party 1910 to 2010, by Dr Alun Wyburn-Powell, University of Leicester. 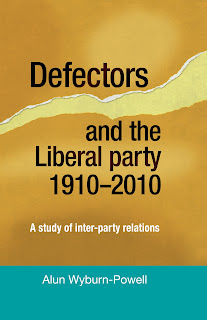 A new study on political defections from Manchester University Press has identified an ‘archetype’ for someone who is likely to break political ranks. The research, published in the week of Lord Stevens’ defection to UKIP, charts a history of defections over a century.

Dr. Alun Wyburn-Powell, from the School of Historical Studies at the University of Leicester, said: “Virtually every week there are defections among local councillors and also less frequently among MEPs, MPs and Lords. Defections grab headlines, worry party leaders and can change the dynamics of Parliament. Defections have never been comprehensively studied before and are not well understood by party leaders or commentators.”

“Over the last century the most likely individuals to defect were male, wealthy, divorced, Eton-educated, from a minority religion, former senior army officers and those who entered politics early.”

“There is a pattern to defections. It is not just a random group of individuals taking one-off decisions. Among defectors, 53% defected for better prospects, 43% over policy and 3% because of personalities. Defection, on average, is a career-enhancing move – chances of ministerial office and honours are higher for defectors than for loyalists.”

“A political defection is an expert opinion on the state of the party at a particular point in time. My findings are based on a study of all 707 people who sat as a Liberal or LibDem MPs from 1910 to 2010. Of all these MPs 16% (about one in six) defected. I also studied the smaller number of MPs and former MPs who defected into the Liberals/LibDems and investigated the cases of other defectors who went straight from Labour to the Conservatives and vice-versa. Virtually all Liberal defectors to the Conservatives were happy with their move, but over half of Liberal defectors to Labour were dissatisfied.”

Looking at the most recent defections of sitting MPs, Dr. Wyburn-Powell said: “It is the Conservatives who are suffering the most defections. This is a turn-around – for most of the last century the Conservatives were the most cohesive party and the Liberals the most likely to suffer defections.” “This pattern may well continue, if the actions of Lord Stevens and departing Conservative councillors are an indication of things to come. Some Conservative MPs are uncomfortable with the coalition and disillusioned about their own career prospects, with many Liberal Democrats occupying ministerial jobs. The coalition government’s attitude towards Europe has alienated many Conservatives and they see UKIP posing a serious threat in some constituencies. Conversely, few Liberal Democrats are defecting, which signals a change from past examples set by the party. Given the rare chance that the coalitions has presented, most Liberal Democrats find that they prefer being unpopular but in power, to being liked but ignored as a forgotten third party.”

Dr Wyburn-Powell added: “I set out to explore the reasons for defections from the Liberal Party in order to discover their role in the party’s near collapse and recovery. The reasons for, and timing of, the decline of the Liberal Party is still contested by historians. My research pinned more of the blame for outward defections on Lloyd George than on Asquith or any other leader. I suspected that there were undiscovered patterns in past defections and that they were not just a random collection of individual decisions.”

“My research reveals a long-term social compatibility between the Liberals and the Conservatives, which was not the case between the Liberals and Labour. However, in terms of policy, Labour and the LibDems are fairly compatible. It is in the interests of both these parties to work on their relationship, as they may need to form a coalition after the next election.”

“Investigating past relationships between parties can lead to a better mutual understanding and respect, which can help in the formation of a future coalition. Studying the reasons for past defections can help parties to avoid losing future defectors.”

• Dr. Wyburn-Powell’s, ‘Defectors and the Liberal Party 1910 to 2010 – A Study of Inter-party Relationships’ was released this week through Manchester University Press.

The foreword is written by Lord Adonis.