Why do the lives and careers of Emile Pereire (1800–75) and his brother Isaac (1806–80) fascinate us? Certainly, their achievements as railway entrepreneurs and bankers were extraordinary, but the answer also lies in the place and the religion in which they were born, the circumstances of their birth, and the dynamic era in which they lived. The French Revolution determined the course of their lives, writes Helen Davies 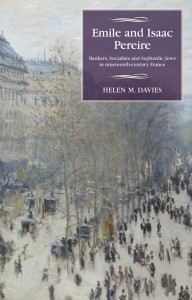 The Pereires were Sephardic Jews, among the first generation of Jews emancipated when, in January 1790, they became free and equal citizens of France. Although the Revolution benefited them in many ways, it also helped to bring Bordeaux, the city in which they were born, to its knees. This eighteenth-century trading power-house lost the Atlantic slave trade on which its vast mercantile success had depended, and it felt very deeply the impact of constant war waged by France’s enemies, especially Britain.
The Bordeaux Sephardic community was, however, close-knit and socially cohesive, providing support for those of its members who became impoverished. The Pereires were beneficiaries of Sephardic welfare throughout their childhood, raised in a single parent, observant, Jewish household by their mother, a devout Sephardic woman.
Moving to Paris in the early 1820s as young adults they were introduced to the economist and political philosopher, Claude-Henri de Rouvroy, the Comte de Saint-Simon, a significant meeting which had an immediate impact on Emile and Isaac. On Saint-Simon’s death they became ardent followers of the movement which took his name, Saint-Simonianism. The Pereires contributed to a system of ideas which focused on the importance of technology to industry and emphasised improvement of the lives of the poorest in society. Individuals would be classed according to their capacities and compensated for their works,
according to the Saint-Simonians. The Pereires could thus be described as ‘early socialists’.
Saint-Simonianism generated ideas and projects which became very lucrative, and put the Pereires among the foremost capitalists in Europe. The sheer scope and spectacular nature of their business enterprises are sufficient to grab our attention. Following their introduction of the first passenger rail line to France (in 1837), they went on to establish some of the most important railways in Europe: in Italy, Switzerland, Spain and the Austro-Hungarian Empire as well as in France.
To finance these enterprises they founded the first investment bank of any size in Europe, the Crédit Mobilier, which they replicated in Germany, Italy, the Netherlands, Romania, Spain and the Ottoman Empire. Their shipping company, the Compagnie Générale Transatlantique, carried the first regular mail and passenger services between France and North America. They were significant urban developers, their Compagnie Immobilière constructing for the Baron Georges Haussmann, the Prefect of the Seine, huge swathes of Paris’s right bank. The Pereires also operated industrial laundries and companies distributing gas lighting, providing horse-drawn public transport and taxi services.
Their business interests generated enormous wealth and their style of living was commensurate with others of France’s grande bourgeoisie – an elaborately decorated mansion on the rue du Faubourg Saint-Honoré; a château outside Paris at Armainvilliers; a seaside resort at Arcachon; extensive collections of paintings and sculpture; extravagant entertainments. Their political association with and support for the Emperor Napoléon III, who had come to power after a coup d’état in 1851, was crucial to their business success, a relationship which had its murkier side. When the Crédit Mobilier failed in 1867, taking with it the savings of many small shareholders, this exacerbated a view popular in some circles that the brothers were corrupt, shady, buccaneers, intent on making themselves wealthy at the expense of poorer people. The truth was much more complex. Nevertheless, endless legal battles embroiled them.
Their personal story, while fascinating in its own right, also shows the dynamic change in the French economy over this period. It highlights the ideas which contributed to its shaping, and the equally radical transformation of French society and politics.
Emile and Isaac Pereire is available to buy now.