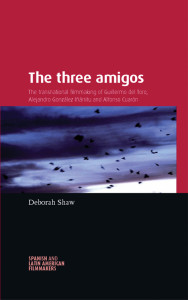 Guillermo del Toro, Alejandro González Iñárritu, and Alfonso Cuarón are highly original directors who have made their names in international circles by pushing the boundaries of filmmaking. They have carved out a space within diverse genres of cinema with each new film garnering media attention that most directors can only dream of. This is, in good part, due to their success at the US Academy Awards signifying their entry at the top table of the global Hollywood film industry. Birdman’s success for Iñárritu at the 2015 Academy Awards where it won 4 Oscars also shone reflected light on Cuarón and del Toro with news stories focusing on the three directors. An article in The Economist compared this success with that of Cuarón who had won 7 Oscars the previous year for Gravity, including an award for best director, while del Toro also gets a name check (as does this book). The gothic romance Crimson Peak (2015) by del Toro is the latest film to capture media attention through reviews, printed interviews and television appearances, and del Toro was give the accolade of featuring in November 2015’s British Film Institute respected film publication Sight and Sound.

However, the question remains, why, given the originality and diversity of their work and their desire to create innovative film languages would the media and this author choose to group these directors together? Simply being Mexican is not a good enough reason, even if they are the most successful Mexican directors of all time in both critical and commercial terms. In Manchester University Press’s The three amigos: The transnational filmmaking of Guillermo del Toro, Alejandro González Iñárritu, and Alfonso Cuarón, I seek to make a strong case for analyzing them in one book, while dedicating individual chapters to specific films by each.

The first reason for considering them together is that they are friends in both a personal and a professional capacity: they act as consultants on each other’s films; promote each other’s work in interviews; they have been co-producers and executive producers on each other’s films, and share actors and key team members, as I outline in the book. To give a few examples: Iñárritu advised Cuarón on Children of Men; del Toro acted as a consultant to Iñárritu and helped with the editing on Amores perros; Cuarón’s production company co-produced Pan’s Labyrinth; del Toro is named as associate producer on Biutiful; and Alfonso Cuarón’s long-time cinematographer, Emmanuel Lubezki, was the cinematographer for Iñárritu’s Birdman. In addition, they are prepared to appear collectively to promote Mexican film culture and to lobby the Mexican government to support the local industry, despite the fact that they, lured by the international finances of Hollywood and Europe, no longer make films in Mexico.

This collective identity is also reflected in the parallels in their career trajectories: each of the directors had a breakthrough film in the same year – 2006 – in terms of establishing their international auteurist status. For del Toro it was Pan’s Labyrinth, for Iñárritu it was Babel, and for Cuarón it was Children of Men. Each film deals with serious issues in aesthetically innovative, but very different ways; each achieved international recognition, and received passionate critical responses. This recognition is illustrated in the fact that all three received nominations for the 2007 US Academy Awards, which cemented the media’s sense of a collective identity, seen in the use of the term ‘the three amigos’ in the international media.

The book also argues that the directors have global auteurist ambitions which Mexico, with its limited funding possibilities, has not been able to accommodate. They share a sense of themselves as international directors who refuse to be bound by traditional national, linguistic, generic and industry borders created by film markets. To give some examples, Guillermo del Toro has made films that can fit within a range of categories with the national signifiers/generic classifications slippery rather than fixed: Hollywood, Spanish, British and Mexican horror, art cinema, Spanish civil war part-realist fantasies and ghost stories, comic book films, action adventure films and gothic romance. Iñárritu has directed a Mexican independent film (Amores perros), Independent Hollywood films (21 Grams and Birdman), a Hollywood funded world cinema text, (Babel located in four countries and featuring six languages), and co-produced an art film set in Spain (Biutiful). Yet across all these countries and industrial contexts, he has developed an authorial style with his team, a style that the book traces. Alonso Cuarón has had an even more varied trajectory, taking on auteurist and studio projects. His features include the state-produced Mexican sex comedy Sólo con tu pareja/Love in the Time of Hysteria, little known outside of Mexico, the transnational hit and Mexican popular art/road movie/subversive teen comedy Y tu mamá también, mainstream Hollywood fare, A Little Princess, and Great Expectations, the US/UK Harry Potter and The Prisoner of Azkaban (2004) for the Warner Bros Harry Potter franchise. Cuarón established his serious filmmaking credentials and authorial voice with a signature extreme long take across three very different films: Y tu mamá también, Children of Men and Gravity. Paradoxically, then, the similarities of the three are found in their diversity and willingness to travel physically and through genres to make films that are frequently game-changing.

As Guillermo del Toro, Alejandro González Iñárritu, and Alfonso Cuarón have moved between national spaces, they have disregarded established borders of genres and classifications, and have, each in his own way, taken from and rewritten the horror movie, the fantasy film, political filmmaking, the road movie, and the sci-fi film, creating hybrid forms which are often branded through the auteurist names of the directors. Their films have caused critics to rethink other classificatory borders, such as those which separate art cinema and independent cinema from commercial mainstream filmmaking, and those which separate world cinema from US cinema. The three amigos: The transnational filmmaking of Guillermo del Toro, Alejandro González Iñárritu, and Alfonso Cuarón seeks to explore the many ways in which the directors have both followed and rewritten the film industry rulebook.