Many outsiders associate film studies with 1960s auteur theory. Otherwise, they imagine scholars compiling box office figures or chronicling Angelina Jolie’s latest on- and off-screen moves. It’s no wonder. Most mainstream popular discourse surrounding cinema – whether critics’ pronouncements or the coverage on BBC news or at the Academy Awards ceremonies – is structured along these lines.

And indeed, anyone harbouring such preconceptions about academic film scholarship would not be so far from the truth. Even today, when one surveys the long programmes of annual conferences, the majority attends to individual works, often in the form of interpretations linking those works to the biographies of their authors or the supposed nature of their national cultures. Media research based in the social sciences, in contrast, often forgoes close-up views of individuals’ decisions in order to furnish synoptic vistas of vast data sets. 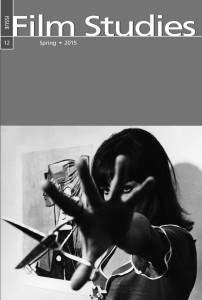 This question motivated Film Studies to try and correct the siloed approach to film and media. Staying true to the journal’s headline mission to present quality interdisciplinary, international and intermedial research, Film Studies 13 and 14 function as a special double issue on ‘Institutions and Agency’. Allied to the growing number of scholars who have been chipping away at arbitrary, yet hardened boundaries between the micro and macro, the humanities and social sciences, our authors push the field further towards a tipping point. The contributors include Jon Lewis on ESPN and the 2014 World Cup; Eric Smoodin on 1950s French audience reports; Julia Knight on feminist distributor collectives; Aidan Power on EURIMAGES and auteurist sci-fi; Andrew Spicer and Steve Presence on medium-scale British production companies; and many others.

We hope you enjoy the articles. Please feel free to contact the editorial board or the individual contributors with your comments. 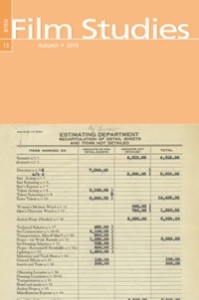 Film Studies is a refereed journal that approaches cinema and the moving image from within the fields of critical, conceptual and historical scholarship. The aim is to provide a forum for the interdisciplinary, intercultural and intermedial study of film by publishing innovative research of the highest quality. Contributions from diverse perspectives that are formed by the crossing of institutional and national boundaries are encouraged.