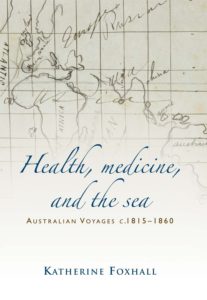 The Society for the History of Navy Medicine is pleased to announce the winner of our first book award.

Katherine Foxhall has won the Harold D. Langley Book Award for Excellence in the History of Maritime Medicine for her book, Health, medicine, and the sea: Australian Voyages c. 1815-1860 published by Manchester University Press in 2012. The Award announcement was made last week at the joint North American Society for Oceanic History, Naval Historical Foundation, North Atlantic Fisheries History Association and Society for the History of Navy Medicine conference held in Portland, Maine. The Award was created in honor of naval historian and retired Smithsonian curator, Dr. Harold D. Langley, who is also a Board member of the Foundation for the History of Navy Medicine. Board President RADM Frederic Sanford, MC, USN, RET and Dr. Kenneth J. Hagan made up the prize committe that selected Dr. Foxhall’s book.

Dr. Hagan writes, “Katherine Foxhall’s book cause[s] the reader emotionally to enter her poignantly depicted world of suffering souls making the seemingly endless sea journey from England and Ireland to Australia in the latter days of the age of sail. She has been able to paint her vivid verbal portrait by meticulously examining and digesting the hitherto largely ignored reports of surgeons who made the voyage charged with maintaining the health of free emigrants and convicts destined for a new life Down Under. It was a six-month’s travail of extreme hardship, seemingly endless deprivation and always-looming danger of death from disease. These surgeons were compelled to submit a report to the government upon reaching Australia if they wished to be paid for their services on the ship. Theirs are the reports that Katherine Foxhall has mined with the eye of a compassionate humanitarian poet living in the relatively antiseptic western world of the 21st century.” 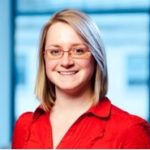 Congratulations to Katherine Foxhall for winning this prestigious award!  The award comes with a certificate, one year membership to the SHNM, and $500. 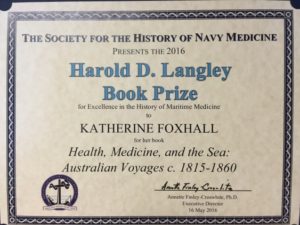 Health, medicine and the sea is out in paperback June 2016.