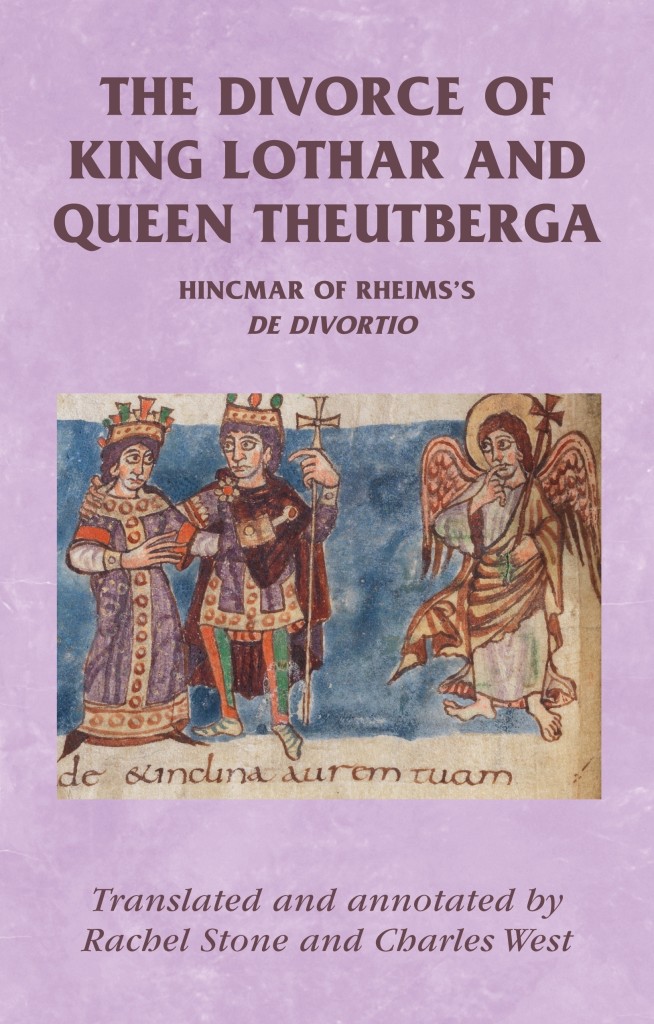 Today sees the publication of a book that we’ve been working on for almost a decade, The Divorce of King Lothar and Queen Theutberga. It’s an annotated translation of a long ninth-century Latin treatise written by Hincmar, the archbishop of Rheims in France. That might seem a rather obscure topic, but when we explain that the treatise is about a royal divorce scandal, and that it discusses  witchcraft, kingship, incest and trial by ordeal, we hope you’ll see the interest. This blog is to explain our book’s cover picture – and why the author we’ve translated would have loved it, and the king he wrote about would have hated it.

The picture comes from the Stuttgart Psalter, a marvellously-illuminated ninth-century book that is now (as its name suggests) in Stuttgart, but that was originally made in Paris, at the monastery of St-Germain-des-Pres (you can see the whole manuscript here). The picture accompanies Psalm 45 (Psalm 44 in the Vulgate), and shows a king and queen embracing. The king and queen are both mentioned in the psalm, but the quizzical angel standing on the right (our favourite bit) is the illustrator’s artistic licence.

Because our text is about a royal divorce – King Lothar II’s scandalous attempt to rid himself of Queen Theutberga – this image of a royal couple obviously resonates. But we also chose this picture because the manuscript it comes from has some connections to our translation. The abbot of the monastery when it was made was a man called Hilduin: as it happens, Hilduin was the teacher and mentor of Archbishop Hincmar, the author of the treatise. Perhaps Hilduin might even have proudly showed the freshly painted manuscript to the young Hincmar.

In any case, we like to think that a thin smile might have played across the lips of the austere archbishop of Rheims if he could see our book cover, mainly because of the watching angel. As Hincmar explains in his treatise, King Lothar’s divorce case affected everyone, both because marriage was fundamental to society and because kings were supposed to set a moral example to their subjects. That meant that they were constantly being watched, both by their subjects and by God, who would condemn them more harshly for their lapses than mere ordinary sinners. And as the illustration shows, you can’t hide from God or his angels – who might not be very impressed by what they saw.

As for King Lothar II, the subject of the treatise, it’s just possible that he might have seen this image too. In the course of the Frankish civil wars of the 840s, it seems Abbot Hilduin left Paris to join Emperor Lothar I, whose kingdom was around Aachen. Perhaps he took the Stuttgart Psalter with him, which would explain how it ended up in Germany. We can’t of course prove that Emperor Lothar’s son, King Lothar II, saw the manuscript at some point during his reign (855-869), but it can’t be ruled out.

But we suspect that unlike Archbishop Hincmar, the king would not have been remotely amused by our use of this particular image for a text about his divorce. The psalm that the picture illustrates in the manuscript is a song of triumph to accompany a magnificent royal wedding. It promises the king a happy and glorious reign, and that his sons will succeed him as rulers. Unfortunately, this is more or less the opposite of what actually happened to King Lothar II, with enormous consequences for himself, his family (including his wives Theutberga and Waldrada), his kingdom, and indeed for Europe as whole – consequences that our new book explores.

Rachel Stone is a Visiting Research Fellow at KCL, and Charles West is a Reader in Medieval History at the University of Sheffield.The Divorce of King Lothar and Queen Theutberga, published by Manchester University Press, is available online for just £10 as part of the MUP sale,  and at all good bookshops for £19.99.