Although not easy to achieve, this equation is simple. So why are there so many frustrated, baffled, intimidated novice writers out there who can’t get their creative and imaginative ideas on the page? Could it be that far too often, they are never taught the basic skills that craft a story?

When it comes to teaching fiction writing, I divide instructors into two camps:  those I call the wizards of Oz and those that actually understand and share with their students the mechanics of the writing craft. The latter are terrific, and congratulations to any student lucky enough to find them.

However, today  let’s consider the wizards and the harm they do to writing newbies that trust them for guidance that’s never imparted.

The wizards play a smoke-and-mirrors game of shrouding fiction writing in a veil of mystery, as though it is some obscure, barely understood rite attended by the handmaidens Vagueness and Opacity. Their classes may be muddled emotion-fests (“Roberta, why don’t you share with us what you felt as Ambrose read his story?”) or they offer exercises in elitism and the so-called critical reading that focuses on  works written only to be critically read. In either case, they are shams.

In the 1939 MGM film, THE WIZARD OF OZ, there is a huge buildup about the Great Oz before the protagonist ever encounters him. He is represented as the all-seeing, all-knowing, all-powerful wizard. When Dorothy finally gains audience with him, great puffs of purple smoke float across the projected features of the Great Oz. His booming voice is stern and scary, thundering at her to forget her goal of returning home to Kansas. But once the green draperies are pulled aside, he turns out to be a con man operating levers on a smoke machine. He’s refused her request, not because he’s so mighty and majestic she’s beneath his notice, but because he really doesn’t know how to help her. He’s not intimidating or powerful. Nor does he possess magical abilities. And because he lacks these qualities, he’s puffed himself into a mysterious and awe-inspiring entity while hoping no one will ever guess the truth–which is there’s nothing to him at all.

Too many writing programs at all levels in American public education are taught by wizards practicing what I call the Oz Factor. Teachers toss a published story at students much as a zookeeper chucks a raw piece of roast at a tiger. The students read it. They discuss it. The teacher rhapsodizes over it. Some students appreciate it. Some don’t. Then the teacher says, “Now that you’ve seen good writing, create a story of your own.”

What? Hold on a moment!

Would you expect a neophyte surgical student to watch an operation and then be told to “try it” on the next patient? Is a hair stylist trained to cut hair by looking at a fashion model? Is a naval pilot taught to fly a multi-million-dollar jet by playing a video game? Do we learn how to write a novel by observing an author at work every day for several weeks?

The teacher of my example is probably sincere in her desire to introduce her students to writing. She has shared a fine piece of literature with her class. But sharing isn’t enough. She may feel frustrated when the majority of her class fails to write anything worthwhile for their assignment. She may wonder why the youth of today have so little to express.

The fact is, young writers have plenty to say but are hindered through a lack of tools by which to express their ideas.

If a teacher fails to provide clarity of instruction in the writing craft or doesn’t know how a story works on the principles that underlie plot progression or how a story is built from start to finish, how can she convey anything useful to her class?

From a student’s perspective, there is often bewilderment and frustration generated by not knowing what the teacher wants.

(Just because you pop the hood on a Chevy Corvette and show students its engine, that doesn’t mean any of them has the least comprehension of how to change its oil.)

Those who really know how a story is written can explain it. Those who don’t, can’t. And when someone can’t explain it, then the Oz Factor usually comes into play. Recently a teaching colleague of mine who is not a novelist forwarded a taped interview to me. It featured an obscure short-story author describing how an idea grows in his mind before it morphs to the page as though in a dream. If that works for him, terrific, but it doesn’t explain anything to anyone else, does it? And after all, idea generation isn’t what most students need to know anyway. They need to know how to turn their ideas into viably plotted tales.

My experience with young writers is that they often feel their writing instructor is all-seeing and all-knowing, but that this knowledge of writing is hoarded or that their teacher possesses special skills but chooses not to share them. Writing is therefore perceived as an ability granted only to a special few members of the inner circle. These are the elite participants in class, the ones the teacher favors. Once again, the Oz Factor is at work. Some writing wizard has snowed these inexperienced acolytes, taken their tuition money in exchange for a diploma, and promised them knowledge they never acquire. And sadly, sometimes the more prestigious the writing program, the thicker the snow job.

Consider the 1987 comedy film, THROW MOMMA FROM THE TRAIN, in which Billy Crystal plays a writing teacher. Yes, there is comedic exaggeration in the movie, but his method of teaching illustrates the fakery I’m discussing in this post. He tells his class, “A writer writes!”

When I watch the classroom scenes, I’m reminded of another movie, 1962’s THE MUSIC MAN, where the con man Professor Hill introduces the “think method” to the band members, assuring them that if they think long enough about the tune he’s assigned they’ll be able to play it. In the film’s happy ending, the “think method” works just enough to save Hill from being tarred and feathered.

But in THROW MOMMA FROM THE TRAIN, what caliber of writing is submitted by Billy Crystal’s students? Dreck.

As a teacher, he’s frustrated with his students and struggles visibly to be courteous. He gives blatantly false praise, and he ditches class at every opportunity. Yet what has he actually taught them? Nothing. The only student he ever shares any writing craft with is Owen, and then only because Owen stalks and pesters him for knowledge. And because he inadvertently teaches Owen–much in the way he might toss a stick into the shrubbery to distract a rambunctious puppy from bothering him–Owen eventually writes a viable plot that’s published.

When wizards of Oz assign students to write a story, they–like Billy Crystal’s character–offer no nuts and bolts instruction of how to do so. Instead, like him, they say in effect, “Just do it. If you’re talented, then you can write. If you can’t write, then you aren’t talented.”

Students that manage to scrawl some kind of loose narrative in such classes are praised. Maybe they’re invited to read their effort to the rest of the class. And although their story may be contrived, ludicrous, or fail to reach a cathartic climax, they’ve written! Behold the effort. Ignore the result.

All the while, a far more talented student may be scrunched down in the back of the class, her mind teeming with a fantastic story world and dynamic characters, yet she’s blocked from writing because she can’t bridge the chasm between her mind and the page. There must be some way to move her characters to the next plot event, but how? If she asks the teacher–a wizard will brush her off, saying, “You haven’t read enough. Go look at James Joyce. Or pay more attention to what your peers are doing.”

Adding to the student’s confusion are the rambling scribbles of classmates praised for writing what her story sense tells her is poorly plotted. If she dares disagree or asks too many questions about construction specifics, she’s likely to encounter the elitist blockade of the Oz Factor. If she probes too deeply into what the teacher doesn’t know–thereby jeopardizing the Oz mask–this student will be told she just doesn’t understand and should consider doing something besides write.

Of course she doesn’t understand the puffery and obfuscation of what should be a clear, easy-to-grasp process of conveying exciting, reader-engrossing story. The writing principles that make a plot flow, that keep readers turning pages, that generate excitement and emotion in readers, have been in play since antiquity. They are simple and clear. They are proven. Sophocles understood them. Shakespeare understood them. Agatha Christie understood them.

But not all so-called writing instructors understand them.

In praising or rewarding weak writing that may be stylish, witty, pretty, or profane–while offering next to no plot–and in ignoring dynamic storylines that wobble but could roll if given correct guidance, these wizards perpetuate a phony pseudo-fiction that doesn’t come close to a soundly plotted genre story and satisfies only the elitist audience contrived for it.

Such a closed, isolated system leads eventually to extinction.

Civilization, however, needs good stories. It is through the art of the story that we share experiences and emotions. It is how we bond. It is how we realize truths. It is how we vicariously survive almost-insurmountable tests and emerge victorious. It is how we play and make believe. It is how we cheer and boo and gasp and live our dreams. It is how we discover what it means to be human–both flawed and wonderful. In these ways, stories serve our society.

Fakery and style alone cannot feed our psyches the way well-constructed stories can. Muddle teaches nothing, and when nothing is taught stories falter.

I consider Toto to be the real hero in THE WIZARD OF OZ. While the other characters are milling around and falling for the great con, Toto just pulls the curtains away and reveals the truth. That is when Dorothy’s dilemma and all the other issues are finally sorted out.

Truth, honesty, and clarity should support learning the craft of writing. Writing teachers have a responsibility to part the veil, end the mystery, and step past the purple smoke. They should draw back the curtains and show their students that scene construction is a clear, easy-to-follow process, that the judicious placement of hooks keeps readers engaged and turning pages, that characters can be introduced in myriad ways with myriad effects, that solid plots need villains, and that stories should build to a conclusive, emotionally cathartic climax built around story principles even the ancient Greeks used to pack theater seats.

As one of my students has said, “Showing the process behind things doesn’t reduce the value of the end product.”

Beware any teacher that proclaims writing can’t be taught. Writing skills certainly can, and should be. 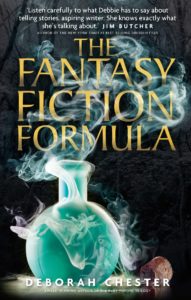 Deborah Chester is the author of The fantasy fiction formula, available at 50% off during our summer sale. Enter Summer16 at the checkout.*

*Offer valid in the UK and Europe only.