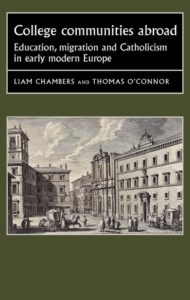 What book in this field has inspired you the most?
Catholic communities in Protestant states Britain and the Netherlands c.1570–1720 (Manchester: Manchester University Press, 2016). Edited by Benjamin Kaplan, Bob Moore, Henk Van Nierop and Judith Pollmann

Did your research take you to any unexpected places?
Contributors to the book draw on a very wide range of source from archives and libraries throughout Europe and further afield.

What did you enjoy the most about writing your book?
The book takes a new look at Irish, English and Scots colleges by comparing them to similar institutions founded by Dutch, Scandinavians, Maronites and others. We very much enjoyed working with an international team of scholars to offer new approaches to the subject.

What did you find hardest about writing your book?
Coordinating between the various contributors and ensuring representativity

Is this your first published book, or have you had others published?
Have already published.

How did you feel when you saw your first published book?
Relieved satisfaction

Why did you choose to publish with MUP?
MUP has a very strong reputation for publishing books of the highest standards on early modern history. We are especially pleased that the book will appear in the influential and important series Studies in Early Modern European History.

Did you approach writing this book differently to any of your previous work?
No, one applied the same critical standards here as heretofore.

Have you had time to think about your next research project yet? What are you working on now?
Working on a study of origins, selection, formation and deployment of clergy in early modern Ireland and its diaspora