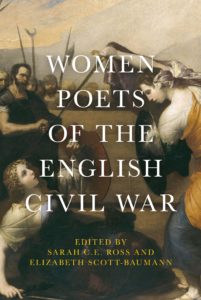 We’ve been inspired by a whole range of scholarship in the field of early modern women’s writing. We’ve both been lucky enough to be working at a time when there has been a huge push to recuperate women’s poems and other writings out of the manuscript archives, so poets such as Hester Pulter and Lucy Hutchinson have newly come to light. Margaret Ezell’s The Patriarch’s Wife, in the late 1990s, was a really formative book for us and we’ve taken a lot of inspiration (and learned a lot) from the work of the Perdita project. Early Modern Women’s Manuscript Poetry, published by Manchester University Press in 2005, is a very important book in our field.

Did your research take you to any unexpected places?
We’ve had to think hard about women’s engagement with print culture in seventeenth-century England. That’s not unexpected as such, but one thing that probably surprised us is that editing poems that were printed in the seventeenth century ended up being much more complicated than editing poems that stayed in manuscript. Three of our poets—Anne Bradstreet, Katherine Philips, and Margaret Cavendish—printed their poems in two different volumes, where the poem texts are quite different. The textual histories of these women’s poems were much more complex than is often assumed about women’s writing in this period.

What did you enjoy the most about writing your book?
Working together! We have mutual interests in seventeenth-century women’s writing, poetry, and poetic form that are overlapping in some areas and complementary in others. Pooling our expertise to create this anthology was exciting and rewarding, as we were able to push beyond what either of us could have done alone. And we’ve got to share ideas, about this book and about other work, over a number of years. Great scholarly colleagues are a fine thing.

What did you find hardest about writing your book?
Editing is very, very precise work, and getting everything right (we hope!) took a long time, and a lot of intense hours. Transcription, annotation, and collation notes all needed to be detailed and accurate, and consistent across the volume, and as any editor will tell you, that can become all-consuming.

Is this your first published book, or have you had others published?
We have each published monographs during the course of working on this anthology – Lizzie’s is Forms of Engagement: Women, Poetry, and Culture 1640-1680 (Oxford UP, 2013), and Sarah’s is Women, Poetry, and Politics in Seventeenth-Century Britain (Oxford UP, 2015). These monographs work closely with a number of the poems in the anthology, so it was very rewarding to prepare for a teaching environment the texts of poems that we’d each thought long and hard about for our other books. We have also each published other volumes of essays in related areas. And we wrote a chapter about the editorial decisions that we made in preparing Women Poets of the English Civil War that is published in Editing Early Modern Women, ed. Ross and Salzman (Cambridge University press, 2016).

How did you feel when you saw your first published book?
Well we haven’t seen it quite yet … but we love the way that the book has been typeset, and we LOVE the cover! The cover image is quite spectacular: it’s a seventeenth-century painting of two women fighting, though (as with many of our poems) it continues to provoke debate over its historical and symbolic subject. It has been argued that it depicts an actual duel over a lover, female Roman gladiators, a topical political allegory, or conflict between virtue and vice. It’s a great visual metaphor for the “fighting work” / engagement in conflict that many of the poems in the anthology represent.

Why did you choose to publish with MUP?
We both use MUP books for teaching, and know them to be of a high quality, and the press has a good world-wide distribution network. We were keen to be part of that MUP list. We were also encouraged by Matthew Frost, who has been very supportive of the project.

Did you approach writing this book differently to any of your previous work?
Editing poems is a different kind of work from writing literary criticism (although it’s obviously related!) It is precise and painstaking, and the poems set their own terms. If there is an obscure word or reference, it must have a note. So it’s a different sort of process.

Have you had time to think about your next research project yet? What are you working on now?
We’re looking forward at the moment to presenting new work at conferences in the US in early 2018, and launching the book there. Sarah is now working on a large-scale collaborative project on women and the poetry of complaint in the English Renaissance, exploring what happens when women take up this powerful and ubiquitous Renaissance rhetorical mode to express erotic, religious, and political protest and loss. Hester Pulter’s poems are a central part of that project. Lizzie is working on a book about literary criticism and gender in the Renaissance, exploring how the very language used to describe poetic style (feminine rhyme, originality, smoothness) was often inherently gendered and the legacy of those terms even today.

Women poets of the English Civil War is available to pre-order now.