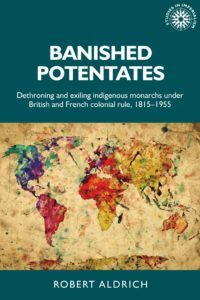 What book in this field has inspired you the most?
In fact, it was a novel – Amitav Ghosh’s The Glass Palace, a dramatization about the exile to India of the last king of Burma by the British in 1885 and the fate of his family. It is an excellent (and historically astute) reconstruction with Ghosh’s usual literary brilliance.

Did your research take you to any unexpected places?
Yes, it allowed me to visit a number of places from which ‘potentates’ were banished or to which they were exiled – the old palace and temple of the last king of Kandy in Sri Lanka; the reconstructed palace of King Thibaw in Mandalay and the tomb of the exiled Mughal emperor Zafar in Rangoon, Burma; the former imperial palace and royal tombs of the Vietnamese emperors in Hué; and Reunion Island in the Indian Ocean, where the French exiled the last queen of Madagascar, two Vietnamese emperors, and a sultan from the Comoros islands.

What did you enjoy the most about writing your book?
The sense of discovery: the lives of these fascinating, but now often unknown, rulers who were exiled, and my own explorations of the history of places as diverse as Morocco and Vietnam, India and sub-Saharan Africa, Burma and Madagascar.

What did you find hardest about writing your book?
Trying to bring together in (I hope) a coherent study cases of the dethroning and exile of several dozen figures from very different societies through Africa and Asia over a period of almost 150 years.

Is this your first published book, or have you had others published?
I have published – as author or editor – around 30 books.

How did you feel when you saw your first published book?
It has been a long time ago (in the mid-1980s), but it made me feel that I had chosen the right speciality and profession in becoming a historian and an academic.

Why did you choose to publish with MUP?
MUP’s ‘Studies in Imperialism’ series is the most prestigious series in the field of imperial and colonial history. I contributed a commissioned chapter to a volume to mark the publication of the hundredth book in the series, and I’ve co-edited with Cindy McCreery two other volumes for the series – Crowns and Colonies (published in 2016) and Royals on Tour (to be published in 2018) – as well as authoring Banished Potentates.

Did you approach writing this book differently to any of your previous work?
Not really, though the coverage of materials over so many countries and a long period meant that I had to ‘tutor’ myself in the histories of many different countries.

Have you had time to think about your next research project yet? What are you working on now?
Royals on Tour: Politics, Pageantry and Colonialism (edited with Cindy McCreery) has now been submitted. Meanwhile, Dr McCreery and I are editing a special issue of the Royal Studies Journal (for publication in 2018) on royal visits to the (British) Dominions of Australia, Canada, New Zealand and South Africa in the twentieth century. We also continue our research on monarchy and colonialism, and are organising a conference on ‘Monarchies, Decolonisation and Royal Legacies in the Asia-Pacific’ to be held in December 2017.
I am also under contract with Palgrave Macmillan to write a book (with John Connell) on Fragments of Empire: Paradoxes of Colonialism in a Postcolonial World, which will update a volume we published twenty years ago on ‘leftover’ colonies and also discuss some new examples of neo-colonialism (i.e., Russia in Crimea, China in the South China Sea).