There was a time when the British high street looked very different than it does today. In 1900, the clothing trade was dominated by tailors and dressmakers and by independent retailers purchasing fabrics and some ready-to-wear from wholesalers. Multiples accounted for less than one per cent of clothing sales. By 1978, that had all changed, and multiples like Marks and Spencer (M&S), C&A Modes, Dorothy Perkins, Burtons, Etam, and Richard Shops accounted for 70 per cent of clothing sales. The rise of the multiples had a massive impact on the inner workings of the fabric market.

In 1900, the cloth industry of the West Riding produced fabric that was sold to woollen merchants, primarily in Leeds but elsewhere as well. In terms of the domestic market, the merchants then sold the cloth a few yards at a time to tailors and makers-up, who then created bespoke apparel for individual customers or apparel for small independent shops on the high street. Of course, some of the mills’ output went to uniforms, blankets, and household products, but, whatever the market, there was always a layer of intermediaries between the consumer and the mill. The merchants were the most powerful players in the fashion supply chain, and they lorded over cloth Britannia from large warehouses in major commercial cities such as Leeds, Manchester, Glasgow, and London. 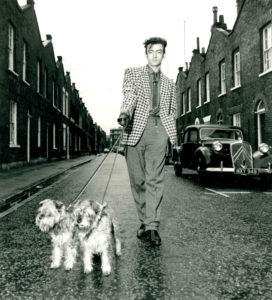 Over the course of the mid to late twentieth century, the multiples became increasingly important players on the high street as British consumers showed a preference for less expensive and more casual clothing. As a result, the business model in the textile-clothing supply chain started changing. The multiples focused on showcasing their brand identities while reducing costs. They sold products that they could purchase in far greater quantities than any individual shopkeeper or tailor. The dominance of multiples on the high street completely disrupted the market for wool cloth and forced the mills to create a new way of doing business.
Abraham Moon and Sons was well positioned to handle this transformation. As a company that had emphasised design since its inception, this Leeds mill was able to work with the multiples to produce fabrics that met their needs on their terms. The mill had long specialised in making inexpensive tweeds for ladies’ outerwear, men’s caps, and children’s clothing. In the years after the Second World War, the mill enjoyed a long-term relationship with the famous high-street fashion house C&A Modes, the great rival to M&S in the market for everyday apparel, especially among budget-conscious moms and fashion-forward teenagers. Abraham Moon sold directly to the makers-up for C&A Modes and thereby supported their needs as one of Britain’s two dominant high-street presences. If it was a stylish colourful tweed bought at C&A Modes, it was likely that the cloth came from the Abraham Moon mill, within greater Leeds.

As the multiples came to be a dominant force in the apparel business, the structure of the cloth markets changed. Only those firms like Abraham Moon who creatively adapted to the needs of the multiples continued to be successful in the late twentieth century. Today Abraham Moon still counts important British multiples, including Burberry, Hobbs, M&S, and White Stuff, among its large portfolio of customers.

Learn more about how the mill designs fabrics for global brands in Blog Five.

Fashionability is now available to purchase on the MUP website.