In the area of James Bond studies two key books immediately come to mind. The first is Tony Bennett and Janet Woollacott’s pioneering 1987 cultural studies analysis of James Bond, Bond and Beyond: The Political Career of a Popular Hero. There is no doubt that this book helped to inspire my approach and aim to explore Bond’s intertextual relationship with Playboy magazine in particular in more detail. The other book that inspired me to take James Bond seriously was James Chapman’s analysis of the Bond films in the contexts of cultural and film history, Licence to Thrill (first published by I.B. Tauris in 1999). I remember reading it when I was studying in the early 2000s and grinning from ear to ear because I so appreciated his engaging analysis of Bond.

A significant portion of the original research for this book was conducted at the British Library. Obviously, the British Library in central London is not a particularly usual place to visit for the purposes of research, but access to Playboy magazine was well supervised. This meant that I spent a significant amount of time seated at a desk studying copies of Playboy under the watchful eyes of the librarians! These days access to Playboy magazine is much more straightforward, since in 2011 Playboy launched a web-based subscription service.

I enjoyed thinking through and discussing the intertextual relationship between James Bond and Playboy in the context of the playboy image and lifestyle. It was great to get the opportunity to analyse Bond and Playboy beyond the superficial associations and to reflect on their significance as interrelated and long-lived cultural phenomena. It was particularly fun finding evidence of and analysing the parallels between Bond and Playboy in the wider context of the playboy image and lifestyle – for instance, the experience of exotic destinations like Tokyo and Istanbul, the love of cars and the Aston Martin in particular, stylishness and suits, an appreciation for certain foods and drink, and a knowingness about how to behave whatever the situation, among many other things.

Finding the time and the head space to think and write is always a major challenge.

I have had other books published in this field and related areas. In the area of James Bond studies I edited a collection of essays and interviews about the Bond fanbase and some of the different ways that Bond has been approached and appropriated over the years, Fan Phenomena: James Bond (Intellect, 2015). In the wider field of film studies, I co-authored the 2011 Routledge Film Guidebook book Fantasy with Jacqueline Furby, and co-edited Hard to Swallow: Hard-core Pornography on Screen published by Wallflower Press in 2012 with Darren Kerr.

I recall feeling proud and excited when I first saw and held it. I still feel very proud when anything I write appears in print because it’s an achievement and the result of a lot of hard work and thinking!

Not only is MUP a well-respected academic publisher, but I was really impressed by the friendly and supportive team from the beginning, and that has continued throughout the publishing process.

9. Did you approach writing this book differently to any of your previous work?

This was the first book I had written alone, and admittedly it has taken me a long time to finish it. The other projects that I have been involved in have been collaborative and that certainly helps with momentum and deadlines. This was harder to write and manage, not because of the research or subject, but because of how I approached the project. I have learnt a lot about myself during the process!

More on James Bond no doubt as I have more to say, not just about the figure of Bond though. There are other aspects of the Bond phenomenon that interest me and might be further researched. Watch this space… 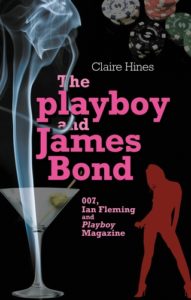 The playboy and James Bond can be ordered on our website now.