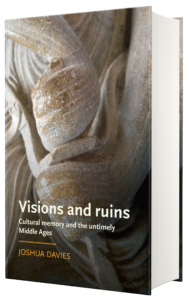 It’s impossible to pick just one, so I’ll pick two. The first is Landscape of Desire by Gillian Overing and Marijane Osborn. The book tells the story of their journeys around Scandinavia as they research the landscapes of early medieval culture.  I think I first read this about ten years ago and I was fascinated by the way Overing and Osborn bring together the personal and the scholarly. The second book is Premodern Places by David Wallace, which is another deeply personal and deeply scholarly project. Wallace brings together a breath taking range of material and draws rich and deep connections between apparently disparate texts, figures and events.  These books obviously share an interest in place and landscape, but what inspired me the most was their insistence that the medieval past and its traces form part of a cultural archive that reaches from the past and through the present. Overing and Osborn and Wallace show how the archives of medieval culture give form to collective and personal experiences. The books are both unapologetically subjective, without compromising the precision of their research, as they open up new ways to know the past.

My research method is always quite intuitive so I was constantly surprised (and sometimes worried) by the avenues I pursued. For example, the third chapter is structured around Thomas Gray’s poem ‘The Bard’, but my starting point was actually John Martin’s painting inspired by Gray’s poem, which I saw in Tate Britain one day when I was taking some students around an exhibition. From Martin’s painting I got interested in the figure of the bard and found János Arany’s poem A Walesi Bardok. It took me a long time to figure out what these texts had in common – it was actually the debate around the EU Referendum in 2016 when it clicked for me that this was all about nationhood and the tensions inherent in the idea of ‘Britishness’. At the same time I was reading W.E.B. Du Bois and his work on ‘double consciousness’ helped make sense of some of the ways the debate constructed identities.

I find the texts, stories and artworks that structure the book absolutely fascinating. To take a few brief examples, The Ruin is an Old English poem about a ruined building, but is itself ruined as the manuscript in which it survives is damaged; Eleanor of Castile is a fascinating figure and her memorial crosses represent a stunning artistic and political project; Elizabeth Price’s Woolworths Choir of 1979 is another brilliant piece of work. The great pleasure of writing the book was working with ideas and artworks that I believe should have a wider audience – I just hope the book does justice to them.

The book is structured around a series of close readings of texts drawn from a wide array of sources, times and places, so the hardest thing was balancing the range and depth of the discussion. I had endless panics about finding the right balance.

It is my first solo-authored book.

MUP’s Medieval Literature and Culture series has published some of the most innovative and interesting work in medieval studies over the past few years. I wanted this book to be part of that. It was my first choice and I would have really struggled to come up with a plan B!

Not really. I tend to work in the same way no matter what I’m doing – an idea, text or event catches my attention and then I slowly nag away at it until I finally realise what it is that is going on.

I’ve just spent three months in Washington, DC, as an AHRC IPS Fellow at the Smithsonian Institution. I’ve been working on the architectural history of the Smithsonian’s headquarters, a Gothic structure nicknamed The Castle. It was built in the mid-nineteenth century and is one of the first large-scale Gothic buildings in the US. I’m very interested in the transfer of medieval culture from Europe to America and I’m particularly interested in how Gothic architecture intersects with ideas about race and nation in the US. I think the research I completed at the Smithsonian will eventually form part of a large-scale project on American Gothic architecture.

I’ve also been working on the history of ‘Anglo-Saxon’ identities, in both the Middle Ages and modernity. I’m really interested in how the idea of ‘the Anglo-Saxon’ has been constructed and reiterated across time and place and the power the racial myth of ‘the Anglo-Saxons’ continues to hold. I hope to have a couple of essays published on that soon and will see where the work goes from there.