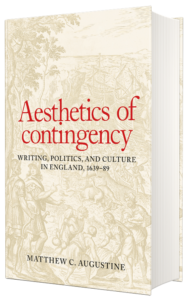 To my mind Steve Zwicker’s Lines of Authority: Politics and English Literary Culture, 1649-1689 remains among the most eloquent and the most illuminating studies in this area. A recent title I much admire is Philip Connell’s Secular Chains: Poetry and the Politics of Religion from Milton to Pope.

In a really wonderful reflection on historical method, John Pocock comments ‘that an author discovers what he is writing in the act of writing it and often does not know what he is writing until he sits down to write’. So in a sense, the writing of the book took me to unexpected places on almost every page. As I worked, I kept finding new senses of ‘contingency’ to unfold, and ultimately I had to try to limit its applications; what began as a historical consideration kept threatening to become a philosophical one.

The book engages in various kinds of mischief in terms of disrupting conventional narratives of literary history, and I confess to taking a certain amount of pleasure in this.

The book tries to juggle a lot of complex historiography without flooding its engagement with literary texts. Striking the right balance was a struggle every time I sat down to write.

This is my first single-authored book. I’ve co-edited two other books, including a kind of ‘companion’ volume to this one called Texts and Readers in the Age of Marvell, which is also being published by MUP.

I felt very pleased with myself, of course, until I began to imagine other people actually reading it.

MUP has long been a leading publisher of titles in seventeenth-century politics and culture, so it was a natural choice.

I tried to think of the reader more in the course of writing the book than perhaps I had done in the course of writing articles and other things; you’re really asking a lot of the reader when you’re writing at a length of 100k words as opposed to 8 or 10k for a journal article. So I tried to leaven the prose a bit more and to make sure I wasn’t presuming too far on the reader’s interest.

I’m working next on a ‘literary life’ of Andrew Marvell: the greatest poet of the seventeenth century, bar none, in terms of the modes and genres in which Marvell wrote. Marvell has ultimately not benefited from comparison to his friend Milton; but Milton couldn’t have written Appleton House any more than Marvell could have written Paradise Lost.

Aesthetics of contingency is available to buy now! Read a sample chapter here.