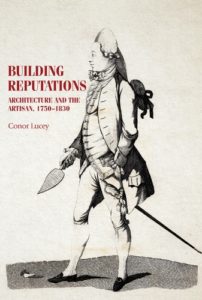 Elizabeth McKellar’s The birth of modern London: the development and design of the city 1660–1720 (Manchester University Press, 1999) had a very profound influence on the intellectual direction of my doctoral research, and has continued to act as a lodestone for my writing and thinking on urban domestic architecture in the early modern period.

Yes. I never imagined that some of the topics discussed and elucidated in the text – the representation of the artisan class in print media, for example, or real estate advertising in the late Georgian era – would form such a core part of the final narrative.

The opportunity to research a building typology across a wide geographical area, from London, Bristol and Bath to Dublin and Edinburgh, and across the pond to Philadelphia, New York and Boston, allowed me to better understand the complex relationship between design and production at a crucial period in the development of the modern building industry.

While I was fully conversant with the literature on the terraced house in eighteenth-century Britain and Ireland, the corresponding American literature, in its scope and complexity, was less familiar and often more demanding. With this broadened historiography in mind, it took time to refine the particular narrative focus of my own contribution to this field of study.

This is my first academic monograph published with a university press. In 2007, research for my doctoral thesis on a collection of eighteenth century architectural drawings was the subject of a book/catalogue raisonée and an accompanying exhibition. In 2012, I co-edited a book of essays on decorative plasterwork in early modern Europe, based on the proceedings of an academic conference.

The composition of a book is a long and often arduous task. As a result, is always a rewarding experience to receive the physical object into one’s hands!

Books published by MUP, specifically from the Studies in Design and Material Culture series, form the core of my academic library for teaching and research.

No. As a book composed for a distinguished university press, I was conscious at all times of addressing an academic audience.

I am currently working on a few different projects, including a study of the reception of Irish eighteenth-century architecture in twentieth-century British architectural histories, and a thematic essay on design as both a profession and trade in Enlightenment Europe.

Building reputations: Architecture and the artisan, 1750–1830 is available to buy now! You can read a sample chapter or request an inspection or review copy.