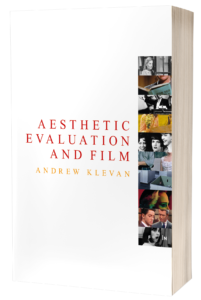 Not unexpected as such, but it was exciting to unearth and revive some of the best philosophical work on aesthetic evaluation and the philosophy of criticism. Some of this work, by writers such as Frank Sibley, Arnold Isenberg, Monroe Beardsley, even F.R. Leavis, despite his fame, is little known and cited now.

Being able to write directly about evaluation and appreciation. It felt natural and authentic, because they are the matters that drive me. Less personally speaking, I do always write about things I think will be valuable to those who care about the art of film, within and beyond academia, and that is satisfying.

Synthesising a wide range of material for each of the concepts the book discusses. It is always a struggle to try to express things clearly and precisely, and as far as possible in ordinary language. Also, trying to do justice to the ideas of other writers and thinkers, and to the films. Nevertheless, one has always to remember that such struggles are relative. Many people in the world struggle to eat or survive. I hope that doesn’t make my struggles pointless, but it does make them privileged.

This is my fourth sole authored book. Each time I’ve tried to write a different type of book. The concern with evaluation has always been there (the word ‘achievement’ and ‘appreciation’ appear in the title of two of my other books), but I’ve tried to come in from different angles and topics. This current book for MUP makes explicit and discursive many of concerns and methods that have often only been implicit in my previous work.

I felt I mustn’t get too obsessed with all the things I wished I’d written differently and better. I couldn’t look at it – Disclosure of the Everyday: Undramatic Achievement in Narrative Film (2000) – for years fearing I would be embarrassed to see the weaknesses. Now I try to dwell on its strengths, and the worthwhile intervention it made. It was the first Film Studies book (in the UK at least) to look seriously at the work of film philosopher Stanley Cavell who is now written on frequently. Its exploration of the ‘undramatic’ precedes much of the contemporary work on slow cinema. The word ‘undramatic’ was hardly ever mentioned then – now I read it all the time! It was also constructed out of close readings. That method is more common again now, but it wasn’t then. A few publishers turned the book down saying that they liked it and its concerns but the method of close reading was a hard sell! I’m eternally grateful for Flicks Books for committing to it. Sadly, like many independent film publishers, they went out of business, but that now means the book has a sort of underground classic status. Many speak well of it because they can’t get hold of it!

MUP has a fine recent history of publishing books on film aesthetics so I thought it would be well received by them and in good hands. And a more personal reason. I was born and grew up in Manchester, and I’m very fond of the city. I like ‘Manchester’ being associated with the book.

Yes, this is far more conceptual than my previous work. Less directly on individual films. It entailed more reading and research. I had to take care on some of the philosophical matters because I’m not a professional academic philosopher. Consequently, I tried to triangulate explanations and arguments across the philosophical commentaries.

I’m considering writing an essay about the reception of the film La La Land. The reviews of the film bewilder me. I can’t see why anyone would think the film was aesthetically of merit. I want to try to get to grips with how they come to the judgements about it that they do!

Aesthetic evaluation and film is available to pre-order now! You can read a sample chapter or request an inspection or review copy.