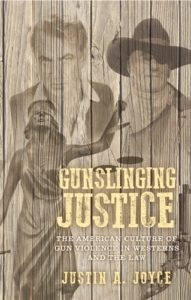 Richard Slotkin’s three-volume study of the American Western genre, The Fatal Environment, Regeneration through Violence, and Gunfighter Nation, is a monumental achievement in the field, as are Lee Clark Mitchell’s nuanced study of masculinity in the Western, Westerns: Making the Man in Fiction and Film, and John J. Cawelti’s pioneering study, Gun Mystique. My research would never have amounted to the book it is today without their contributions.

Richard Maxwell Brown’s book No Duty to Retreat completely changed the direction of the project. Prior to reading his work, the project was focused on representations of masculinity within the American Western genre.  Brown’s insightful study of American self-defence laws, however, opened the door to richer interdisciplinary analyses of the evolution of the genre and its interrelationship with the ways the American legal system adjudicates self-defence.

Honestly, movie day. A good portion of this book’s research involved watching film after film after film, many of them several times over. Though I’ve my issues with many of the genre’s tenets, it was a uniquely pleasurable part of this project to watch 2-3 Westerns a day for the better part of 3 years.

Weaving a very old and often misunderstood legal history together with a genre that most people feel they already understand was a real challenge, but the hardest part of that was treating the highly contentious 2nd amendment material without making the project about that issue.  Gun rights is so highly polarized in the US that it’s quite hard to talk about it in any engaged way without taking sides.  Trying to get interlocutors and readers to go through a new way of thinking about this issue, to open up new interpretive possibilities beyond whether or not we should be banning guns is a huge obstacle.  The debate is so entrenched that it is hard to make any headway beyond the polarized positions.

I have co-edited a collection of essays (A Melvin Dixon Critical Reader), and worked on the posthumous completion of two monographs (Vincent Woodard’s The Delectable Negro and Lindon Barrett’s Racial Blackness and the Discontinuity of Western Modernity), but this is my first single-authored book.

“Book day” is a big event in my house.  My spouse is in an entirely different industry, and my children are too young yet to really grasp what it means to be a scholarly writer, but the whole house is buoyed by the arrival of a book with “Joyce” on the cover.

So much of the work we do as scholars and writers is a solitary business, an extended epistolary conversation with other readers, writers, and thinkers somewhere “out there,”  the interlocutors that are part of the critical conversation we engage in as we approach our reading and writing.  To have a tangible, material version of that conversation is satisfying beyond measure.  It’s a testament to the years and tears put into a project, and a promise of continued participation in an extended discussion on an important topic.  Publishing one’s first monograph is no less than the achievement of a goal I’ve been pursuing most of my adult life; to say I’m ecstatic is an understatement.

I chose MUP as one of the leading UK publishers because I wanted to ensure that my book had wide distribution outside the United States. I was impressed by MUP’s catalogue, in particular the mix of humanities, film studies, and legal analyses and I thought my interdisciplinary approach would receive a favourable reading from the commissioning editor.

I also have a working relationship with many of the folks at MUP in my role as the managing editor of James Baldwin Review, and quite simply I’ve found the press approachable and supportive all along.  Once I settled on a UK press, MUP was the natural choice in my mind.

I tried harder in this project to keep top of mind readers coming to the book from entirely different angles as I wrote. As the project blends several disciplines together, I wanted to make sure that people coming from all these different discourses would be able to access the argument, and I remain hopeful that this approach will allow readers to use my approaches as a springboard for other interdisciplinary projects and cultural histories.

I’ve not a true sequel lined up, exactly, but gun rights are again, tragically, a hot issue in the US. This, along with a spate of new Westerns on TV and film continue to occupy a fair chunk of my thinking time; surely there’s another publication on Western and American gun laws to come from this.

Finally, I’m in the early stages of adapting the interdisciplinary, Foucauldian analyses in Gunslinging Justice to other genres. Specifically, I’m working on a collection of essays on children’s televisions shows and movies, tentatively entitled What the Kids are Watching.

Gunslinging justice: The American culture of gun violence in Westerns and the law is available to pre-order now! You can read a sample chapter or request an inspection or review copy.