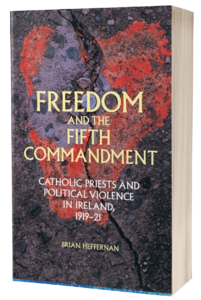 What book in this field has inspired you the most?
There is now a whole range of excellent books on the Irish Revolution, many of which are thoroughly inspiring – and this number is increasing as the Decade of Centenaries progresses. But I came to the subject through Joost Augusteijn’s work – his From Public Defiance to Guerrilla Warfare has been an important inspiration.

Did your research take you to any unexpected places?
Yes, the smaller church archives that I visited are often off the beaten track. I remember one archive where I was asked to sign a form stating I wouldn’t bring food or drink into the reading room. As soon as I had put my pen down, the archivist came in with a huge tray with tea and cakes… Having to travel to small archives across Ireland was one of the joys of writing this book.

What did you enjoy the most about writing your book?
It’s great when the whole thing suddenly comes together in your mind. It’s an exciting moment.

What did you find hardest about writing your book?
The difficult part is you can’t control precisely when that moment comes, and before it has happened you can’t see the wood for the trees. But as you get more experienced your research itself becomes more problem-driven and focused.

Is this your first published book, or have you had others published?
It was my first monograph, although I’d previously co-edited a volume of essays (Life on the fringe? Ireland and Europe, 1800-1922) (2012). I’ve subsequently had the chance to write another book, on Augustinian Friars in the Netherlands in the 19th and 20th centuries – it’s also on clergy and modern society, but there is much less political violence in it…

How did you feel when you saw your first published book?
It was a fantastic feeling, but also terrifying because you know there’s no way back and you’re at the mercy of the reader now…

Did you approach writing this book differently to any of your previous work?
It’s based on my PhD thesis, but I reworked the thesis as the Bureau of Military History’s witness statements on the revolutionary period became available and digitally searchable online. That added a whole new body of source material to incorporate. It also allowed me to turn the whole thing into a more coherent whole. For me writing Freedom and the Fifth Commandment was the first time it worked and everything came together.

Have you had time to think about your next research project yet? What are you working on now?
Yes, I’m still working on modern Catholicism, but I’ve moved to research of religious institutes from the perspective of cultural history, particularly in the Netherlands. What motivated so many young men and women in modern society to join a religious institute, what self-images did they have, and what impact did they have on society? I’ve since published a book on the Dutch Augustinian Friars, and I’m currently working on a new project on cloistered nuns (Discalced Carmelites).

Brian Heffernan is a University Lecturer in History at Leiden University.

Freedom and the Fifth Commandment is available to buy now.