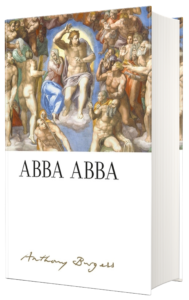 How would you like someone who has read your book to sum it up in one sentence?
ABBA ABBA is a great read from the exceptional Anthony Burgess, unknown sides to whom are on full show here.

What book in your field has inspired you the most?
Translating Style by Tim Parks for my work in Translation Studies.

Did your research take you to any unexpected places?
Bracciano, in the countryside outside Rome, where Burgess lived; Brussels, where the linguist now lives who helped Burgess with Belli’s Roman dialect; and Austin, Texas, where many of Burgess’s papers now reside at the Harry Ransom Center.

Which writing process do you use (computer, longhand, dictate, other)?
Computer and longhand.

Why did you choose to publish with MUP?
Burgess was from Manchester and read English at Manchester University. It seems only proper that MUP should publish his collected works in a fitting scholarly edition.

What are you working on now?
I’m finishing a monograph on Belli, and writing another on Burgess’s time in Italy.

If you could go back and give yourself one piece of advice when starting out on this project, what would it be?
Don’t assume anything.

If you could have been the author of any book, what would it be and why?
Graham Greene’s The End of the Affair, because it had a profound effect on me as an adolescent. Burgess preferred The Power and the Glory and The Heart of the Matter.

What other genres do you enjoy reading?
Poetry, and fiction, particularly translated fiction.

Which authors (academic and not) would you invite to a dinner party?
John Keats, Giuseppe Gioachino Belli, and Anthony Burgess. Burgess stages something close to this in Part One of ABBA ABBA.

Paul Howard is a Senior Teaching Associate in Italian in the School of Modern Languages at the University of Bristol.

Learn more about The Irwell Edition of the Works of Anthony Burgess by clicking on the banner below.