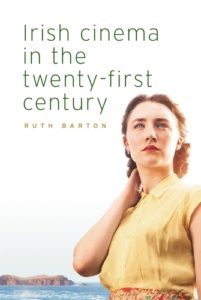 When I wrote my previous monograph on Irish cinema, Irish National Cinema (Routledge, 2004), I was one of a series of writers trying to tease out just what a national cinema might be. Even then, I realised, it was whatever you chose to piece together from an à la carte menu of titles. It had to include a cinema that spoke to and for the Irish diaspora, one that questioned the national, and one that addressed multiple ways of being Irish. The old methodologies of defining a national cinema by its funding sources were no longer fit for purpose, too rigid for an increasingly borderless industry.

If it was challenging in 2004 to identify what an Irish film might be, by 2019, as my new monograph, Irish cinema in the twenty-first century, is published, it seems like a rabbit hole better avoided. I needed to write a new study of Irish cinema to do justice to the flow of new productions, many of them in genres that I hadn’t previously associated with Irish filmmaking. In 2004, the Irish horror film, the Irish documentary, and Irish animation barely existed. Now they are flourishing. The National Question has been resolved (or at least parked) with the Good Friday Agreement of 1998; the Celtic Tiger is history; the Crash has come and gone, and we are once more the most globalised country in the world. The new environment of filmmaking is dominated by co-productions, by the possibilities of the digital, and by the threat of alternative screens. Rural Ireland has been displaced by the city as the locus for exploring identity politics. Everything belongs in inverted commas, not least ‘Ireland’. Still, some things remain the same – women’s narratives are as marginalised as they ever were, as are convincing representations of Ireland’s minorities, be they Travellers or new immigrants.

Irish cinema in the twenty-first century is my attempt to address the place of the national in a small-nation cinema. Not all Irish filmmakers tell Irish stories. Lenny Abrahamson broke through on the global scene with his stunning Room (2015). Yet long before that, he made Adam & Paul (2004), a Beckettian dark comedy about two Irish heroin addicts that still rings true in Dublin today. British directors have a habit of making Irish history films, as did Ken Loach (The Wind That Shakes the Barley, 2006) and Stephen Frears (Philomena, 2013). Irish film production is inherently transnational. Yet, that doesn’t mean that Irish filmmakers are no longer interested in telling local stories. Far from it. Many of the films I discuss in Irish cinema in the twenty-first century are intensely engaged with issues of Irish identity. Perhaps most local of all are the documentaries, few of which have made any impact outside of Ireland and the festival circuit. Digital equipment has opened the door to mini-budget productions such as Gerard Barrett’s Pilgrim Hill (2013), a film rooted in Irish rural trauma. But funding does not determine all, and, despite his protestations to the contrary, John Michael McDonagh’s Calvary (2014) speaks directly to the concerns of contemporary post-Catholic Ireland.

As a national cinema, there is no sense that the nation Irish cinema constructs in its documentaries and fictions matches any one person’s understanding of what Ireland may actually be. The Ireland of cinema is a protean space, made and remade with each production. It is ‘Ireland’ not Ireland. This book has an image of our most successful female star in decades, Saoirse Ronan, on the cover. Yet Ronan has only made one Irish film, Brooklyn (John Crowley, 2015) to date. Irish cinema will be more interesting when it engages better with all its constituency. In this, as in many respects, it is not alone amongst national cinemas. My hope for this new monograph is that writers on other cinemas will see reflections of their local concerns in what I have discussed. Most of all, it was written out of my own interest in exploring Irish filmmaking beyond the instant review or the aggregator site. In doing so, I hope to have created a space for others to argue about what Irish cinema might be.

Ruth Barton is Associate Professor in Film Studies at Trinity College Dublin. She has published widely on Irish cinema and her works include Irish National Cinema (2004) and Acting Irish in Hollywood (2006). She is a regular film critic on RTÉ radio’s Arena. Irish cinema in the twenty-first century is available to buy now.