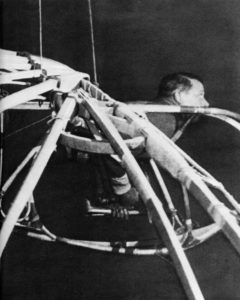 Architecture is the art of designing buildings, right? Or towers? Plazas? Bridges. All of this. But it can also be the art of making – mass-produced wings. This was, at least, the interpretation of architecture sustained by Soviet designer Vladimir Tatlin. He is best known for his Monument to the Third International designed immediately after the 1917 October Revolution, which was the Communist answer to the Eiffel Tower, which, if built in Petersburg, would stand 400 meters tall.

Some 15 years after that project, in the early 1930s, the architect has himself photographed with his big nose peeking out, like a beak, from this skeletal contraption. He clings firmly to handles attached to it, his body seemingly hanging in mid-air. This thing is – Letatlin. Literally “flying Tatlin”, the Letatlin was a mechanical bird powered by pedalling and using hands to clap wooden wings. Tatlin considered this project to be not only a technical experiment but the highest form of architecture, “the ultimate form that will aid the need of the masses for the mastery of space”.

What made this project different than plans for man-powered wings of the past, like those of Leonardo da Vinci, was that it was patently modern – the architect’s main obsession was having it work so that it could be produced in 1,000,000 copies, and distributed to the masses. Eventually, according to Tatlin’s vision, every Soviet citizen could use the wings in everyday life, for example for going to work or paying visits to friends. In order to help forging an aerial lifestyle, architect envisioned introducing flying lessons in schools. To fly, according to him, was “as essential as it is to swim”. 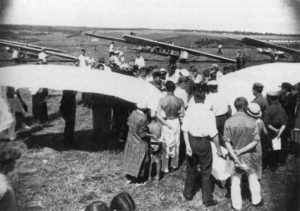 The Letatlin was tested for years in the fields around Moscow. Tatlin concluded at a certain point that he was too fat to operate his invention so he hired pilots that were skinnier than him, but to no avail. The Letatlin did not work. But it remains a powerful testament to an entire era, an era in which architecture was not only the art of making buildings but the art of everything that had to do with what Tatlin termed “the mastery of space”. An era in which one of the main goals of architecture was to transform the lives of ordinary people so that become more modern, more progressive, but also more willing to participate in what the State called “the building of socialism”.

Essentially, like Tatlin the flying architect, every citizen was supposed to become a new kind of being, who can, conceivably, be able to fly to the corner store. It would be wrong to think the architecture of the 1920s and the 1930s in Russia as completely utopian like Tatlin’s projects. There were buildings, contraptions, infrastructure, as well as entire environments that were actually realized. But what all of them had in common with Letatlin was that they were developed in the service of one all-consuming and hyper-ambitious project, the enterprise of creating an upgraded citizen – the communist New Man. 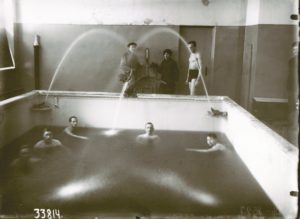 We rarely think about architecture as means of creating our social and political identity. But if we think not only of monuments but also of ways in which our everyday lives are organized, often at the most intimate scale, we can fathom how architecture moulds ways we understand power, social relationships, pleasure. What does it mean to have a “master” bedroom in terms of family relationships? What do we understand as learning if our university lecture hall to be organized to have a speaker’s podium and an amphitheatre? Why do usually only men have a “home office” or a “den”? Why do we put curtains on our windows and what does that mean for our understanding of privacy/publicity? Why is a hot tub considered decadent and the shower is considered “efficient”? Why does a modern house have a corridor or a hallway and 16th century houses did not? Why and where do we use mirrors? What does it tell us about rituals of grooming? And so on and so forth.

Whereas we cannot always understand the mechanisms by which houses “operate” on our identity at the present, since we are so immersed in our everyday spaces and often cannot create a critical distance, we can look at examples from the past, if for nothing else, so that we can get a perspective on our present. In Communist Russia in the decades after the October Revolution people had perhaps a very different experience of the quotidian, of course. Food was scarce. Space was scarce. Violence was much more in the open. It was a modest social background that was appreciated, not royal lineage. Women were encouraged to go to work, vote, have premarital sex, as early as 1920, but also deeply oppressed. But looking at the ways in which architecture moulded their self-understanding, defined them as political beings, reveals all the possible ways in which architecture can be utilized to create an ideological subject, someone whose life and identity are shaped by the State and who participates in the socialist project by responding to the State procured model. 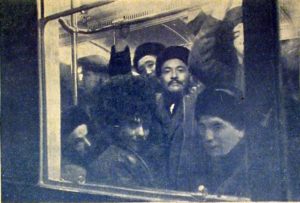 Delegates of the Party Congress on the first Metro ride, How We Built the Metro (Kak my stroili Metro), 1935

If we look at architecture of the 1920s and the 1930s, as the project of creating the New Man by manipulating the environment, we encounter theatrical performances such as those in the biomechanical theatre, which were supposed to show how people should understand their movement in space, their bodies and desires. Homes that were organized, not unlike Western modernist project so that people are more “efficient” in doing house chores and their belongings and activities occupy less space. Colossal government projects, such as the Moscow Metro, which were not only meant to improve urban life but also to demonstrate what it means to know the experience a modern life, through the experience of speed but also the experience of indulging in the flicker of smooth surfaces and electrical lighting, the glamour of modernity. In all these cases, methods of using architecture to craft identity involved choreography, statistical analysis, control of “invisible” systems such as heating and cooling, manipulation of lighting. And architecture was not an isolated project. It was supported by literary fiction, aesthetic theory, even methods employed in workers’ training. 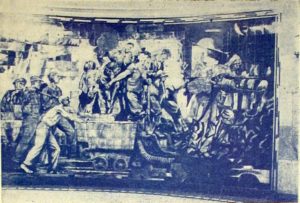 Mosaic on the wall of Komsomol’skaya Metro station, Moscow, 1935

Ultimately, any study of the architectural history, and especially the study of this moment in which architecture had an easily grasped ideological role, helps pose questions rather than answering them. There is the perennial question – “What is architecture?” – a problem that has as many solutions as there are architectural projects. But there are also more broader questions. What is the social meaning of architecture? To which extent, ultimately, are our lives constrained by design and to which extent are we free to shape to world we live in?

I don’t pretend to answer all these questions in Modernism and the making of the Soviet New Man, but promise to take you on a journey that will be as enjoyable as it is challenging and open up a world from the past that will help us begin to understand our own.

Tijana Vujosevic is Assistant Professor at the University of Western Australia. Modernism and the making of the Soviet New Man is now available in paperback.