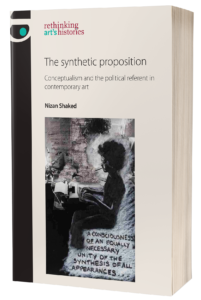 The Smithsonian American Art Museum has awarded the 31st annual Charles C. Eldredge Prize for Distinguished Scholarship in American Art to Nizan Shaked for her book The synthetic proposition: Conceptualism and the political referent in contemporary art (Manchester University Press, 2017). Shaked examines the impact of civil rights, Black Power and the student, feminist and sexual-liberty movements on conceptualism and its legacies in the United States between the late 1960s and the 1990s.

The jurors wrote in a joint statement, “Shaked’s book demonstrates… a broad interdisciplinary approach that is shaped by modern and post-modern philosophy, linguistic theory and social history; the author posits a rethinking of the methodologies that have been employed to engage in discussions of minimalism and conceptual art.”

The jurors wrote: “The book provides an important bridge from practices that first emerged in the 1960s, and later were expanded toward the end of the century. From Shaked’s excellent analysis, we can see the long history of several liberationist movements—among them civil rights, Black Power, feminist and queer liberation—as they played out with some of the most consequential vanguard artists of the past half-century. Indeed, through the lens she provides, it is now evident just how much artists engaged and extended the politics of the 1960s through their language-based practices.”

Dr Nizan Shaked is Professor of Contemporary Art History, Museum and Curatorial Studies at California State University Long Beach, where she heads the Museum Studies Track in Art History. She has contributed critical and art historical writing to publications with the Museum of Modern Art (New York), Oxford University Press, Verlag für Moderne Kunst, and Phaidon as well as reviews and articles for Art and Education, American Quarterly, Journal of Curatorial Studies, Counterpunch, Afterall, and X-TRA Contemporary Art Quarterly, where she has been a member of the editorial board since 2008.

Shaked’s curatorial projects included Fetish: Art/Word at the UCLA Fowler Museum of Cultural History (2002), Symmetry (with Kimberli Meyer 2006) at the MAK Center for Art and Architecture (2006), and How Many Billboards? Art Instead (with Kimberli Meyer, Lisa Henry and Gloria Sutton in 2010), which received an Emily Hall Tremaine Exhibition Award. Shaked was a DAAD research fellow in 2012. Her book The synthetic proposition: Conceptualism and the political referent in contemporary art (Manchester University Press, 2017) is a 2015 recipient of the Wyeth Foundation College Art Association Publication Award.

About the Eldredge Prize

The Eldredge Prize, named in honor of the museum’s former director (1982–1988), is sponsored by the American Art Forum, a patrons’ support organization. This annual award, initiated in 1989, recognizes originality and thoroughness of research, excellence of writing and clarity of method. Single-author, book-length publications in the field of American art history appearing within the previous three calendar years are eligible. December 1 is the deadline for 2020 nominations.

Recent Eldredge Prize recipients include Susan Rather (2018) for her book The American School: Artists and Status in the Late Colonial and Early National Era, Jennifer L. Roberts (2017) for her book Transporting Visions: The Movement of Images in Early America and Michael Lobel (2016) for his book John Sloan: Drawing on Illustration. A complete list of past winners is available online.