Over the past seven years or so I have been investigating the cave burials of the British Neolithic (c. 3900 to 2400 BC). These burials are closely linked to the better known collective burials from chambered tombs and long barrows in the same period. Cave burials have often been thought of in the past as a poor relation: often the suggestion is that a social elite were buried in monuments and cave burial was for a more marginalised part of society. I got interested in this whole topic while working on the archaeology of the, much earlier, Palaeolithic period. Time and time again I was struck by the amount of later prehistoric evidence which seemed to survive from these cave sites. Gradually these two themes came together, and I began to wonder if there was enough material for a study of Neolithic cave burial in its own right. These burials, it seemed to me, were numerous enough that they could be discussed and interpreted on their own terms. 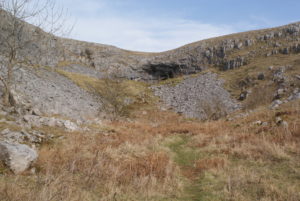 Kinsey Cave in the Yorkshire Dales, where deliberate burial took place during the Early Neolithic, the cave also has evidence for Palaeolithic, Bronze Age and Romano-British activity

I have been particularly keen to try and understand the kind of funerary rites which took place in caves. These rites would have connected living people, dead bodies, artefacts, caves and cave landscapes. I wanted to understand what it was about caves that made Neolithic people decide to bury their dead in them. In Neolithic cave burials, I have approached this problem by looking at how all these different elements might have interacted. I have drawn on a wide range of ideas but have been particularly influenced by earlier studies that investigated the agency of objects and natural places.

An example of the benefits of this kind of research comes from the small cave at Chelm’s Combe, Somerset (NGR ST 4634 5447). This cave was excavated in 1925 in advance of a quarry expansion which completely destroyed the site. Radiocarbon evidence shows that burial took place here between 3630-3365 BC, during the latter part of the Early Neolithic. There were large quantities of human remains discovered in the upper fills of the main cave. Additionally, in the cliff face below the excavation team discovered a small rock-cut chamber around 0.9 m wide which had been used for burial. 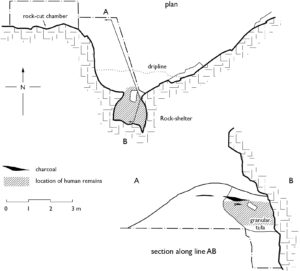 Plan and section of the excavated deposits at Chelm’s Combe

Studies of the parts of the skeleton found at these different parts of the site seems to indicate that bodies were first exposed in the cave. The skeletal elements found there are dominated by small bones and extremities which would be most likely to disarticulate early in the decomposition process. After some time, once the bodies had become skeletonised, the larger bones were collected together and re-deposited in the rock-cut chamber. The skeletal elements from that part of the site are predominately those which would have been likely to remain visible and articulated.

The extended funerary rite at Chelm’s Combe shows how the biochemical processes of the body’s decomposition would have displayed the passage of time. They would have marked the temporality of the dead person’s journey from being a living person to an ancestor. The number of different bodies buried at Chelm’s Combe shows that this process happened multiple times. The temporality of these successive funerals was also marked by the way that pottery and flint tools, which were deposited in the cave at the same time as the bodies, gradually became buried in the actively forming cave deposits. The presence of broken grave goods from earlier funerals, half–buried in the cave floor, would have demonstrated the passage of time between the previous funerals. 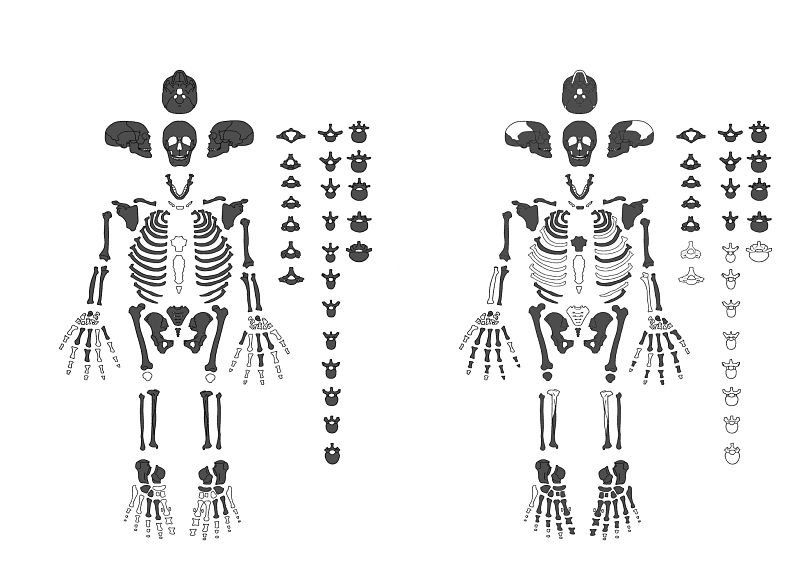 The area of the cave where the bodies were placed had a naturally forming granular tufa deposit. This is a powdery white calcium carbonate precipitate which builds up relatively rapidly in some caves. Here it would have had two effects. The rapid build-up of tufa would have shown the passage of time as it buried the artefacts and bones in the cave. However, it would have also slowed down and masked some of the processes of bodily decomposition, changing the way that they indicated the temporality of the burials.

The living people taking part in the funerals would also have responded to and created temporal cues as they interacted with the cave environment, the artefacts, and the bodies. They would have added objects and bodies to the cave and moved them to the rock-cut chamber. They would also have had a considerable impact by choose the cave and creating the rock-cut chamber in the first place. Therefore, all of the funerary rites would have been understood as a blend of the activities of the living, the dead and the cave. All of these elements would have been essential for these burials to take place.

Rick Peterson is Senior Lecturer in Archaeology at the University of Central Lancashire. Neolithic cave burials: Agency, structure and environment is available to buy now.