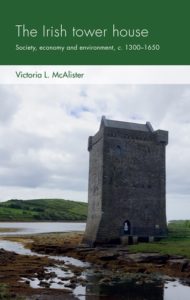 Who knew you could tell so much from a tower house!

This is a tough one! Perhaps E.M. Jope’s Archaeological Survey of County Down (HMSO, 1966). I first used this intensively as an undergraduate and it set the bar high for a best practice model for conducting fieldwork. At the same time, it was clear that there were limitations to the archaeological surveys’ scope and so I knew from quite early on where my work could fit within the literature.

I ended up doing fieldwork at over 200 tower house sites across Ireland, as well as comparatively more sedate periods in archives and libraries. Accessing the manuscripts reading room in Trinity College Library is always fun, since you get to take down a velvet rope and pass the point accessible to tourists in the Long Room (sometimes much to their consternation!). My fieldwork experiences did inspire the title of a conference talk: Chicken coops, pigeon lofts, and tower houses; which I think says a lot about some of the places I ended up surveying! It was a great research project that took me to many places I would never ordinarily go. Lowlights include being chased by farm animals – I lost a good chunk of cash to a farm dog who bit right through my rental car tyre one time.

Computer. I need to edit the life out of my writing before anyone can see it as I don’t believe I’m a natural writer and it’s easiest to make cuts and move things around on a computer. Proofing is definitely always on paper though. I also like the ability to search for a word on a computer, as I am always losing my place, a reference, some notes…

Friends and colleagues had already published with MUP and had nothing but good things to say about the experience, unlike many others, so I decided to approach MUP with my book first.

My Irish tower house book has pointed me towards a second monograph project. This examines changes in landscape and the natural environment brought about by the Anglo-Norman and early modern colonisations of Ireland. I’m also collaborating on a very exciting digital humanities project which is using data gathered from drones to identify deserted medieval rural settlements in Ireland – there’s so much beneath our feet that before now we could only guess at!

Fieldwork assistants are worth their weight in gold.

One that would generate a steady additional income yet bring me no fame so that I could continue living my life.

I read a lot of fiction. I find I read very little non-fiction outside of work because otherwise my brain starts churning out new ideas and then off I go on a tangent.

The Bronte sisters – people who came up with such remarkable stories must be fascinating to talk to at a dinner party. For entertainment and great stories, Joan Rivers. Several of the leading female academics in my broader field, like Ella Armitage, Eleanora Carus-Wilson and Eileen Power, to ask how they did it. For the same reason, pioneers in their fields like Marie Curie, Mary Wollstonecraft, and Ada Lovelace. People who used the Public Records Office prior to the Four Courts fire of 1922 so I could interrogate them about what was in the medieval material sadly lost in that catastrophic fire. Maybe Edmund Spenser, because he lived in a tower house and I could see what I got right…or got wrong.