First published on the IACL-AIDC Blog. 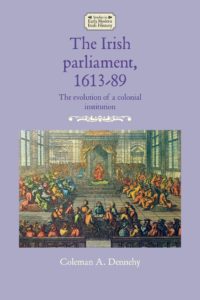 Q1: Tell us a little bit about the book

I’ve written a book on the Irish parliament in the seventeenth century, considering in particular its legal and administrative functions. The Irish parliament is probably as old as the English, and can certainly be identified as parliamentum no later than June 1264, possibly earlier. Its development was similar to that of England in the period, breaking into its familiar house of commons and house of lords before the end of the medieval period, and undertaking familiar tasks and responsibilities. The medieval parliament, for example, undertook a considerable amount of legal adjudication, probably much more than in the early modern period and probably more than in England. It served the English state in Ireland and so was a purely colonial assembly, the Gaelic Irish being (as a general rule) excluded until the Act of Kingly Title in 1542, when the medieval lordship was converted to the modern kingdom. Its development was a mix of conscious following of an imperial model, as Westminster later became, but also local conditions shaped it and so it remained, as least to some extent, particularly Irish. So to a point, my study is a consideration of just how well the Irish parliament of the seventeenth century fitted into this model.

Traditionally, historians that reference the Irish parliament in the seventeenth century tend to do so as part of a political narrative and by way of describing the fractured relationships between communities in early modern Ireland, or indeed to illustrate the reasons for the civil wars of the 1640s. There is nothing wrong with this interpretation and indeed it serves us well in many regards. However, as well as the more recognizable functions of sometimes representing constituents, reading bills, voting funds, and providing counsel to the monarch, parliament also had interesting internal administrative systems and administrative functions, and it served as the supreme court of (the English parliament disputed this and suggested ‘in’ is more accurate) the kingdom.

Thus in order to rebalance perceptions rather than to relegate the importance of politics and representation, this book conspicuously avoids a political narrative and most of the political concerns and dramas played out in the Irish parliament in the seventeenth century. It seeks to highlight the role that parliament played in the state and also how it interacted with the other components of the state, including central and shrieval administrations, as well as the law and the courts. Rather than concentrating on high-constitutional matters such as the status of the Irish parliament in relation to the crown or the English parliament, this book instead illustrates what everyday events, procedures and processes tell us what these relationships and statuses were when the great orators and political pamphleteers weren’t looking.

My introduction is used to set the historiographical scene and to consider why this history hasn’t been yet written up to this point for the early modern period and also analyses the sources that we might use in such a history. Petitions and the administration of justice (Ch. 2) feature as one of the more under-rated aspects of parliaments work, but one which took far more time than legislation or counsel to the monarch. It is useful not just to see how parliament worked as a court or a venue for airing grievances, but also a window onto Irish society and law at the time. Whilst the making of statute law (Ch. 3) is hardly a new topic, my book will not focus on the mechanics of Poynings’ Law outside of parliament, but specifically on the passing of legislation inside the chambers of parliament. In writing on the officers and servants of parliament (Ch. 4), there is regular reiteration of the legal origins and functions of parliament, as most of these officers and servants (from the speaker down to the lowliest functionary) worked in the institution in a manner similar to most other courts in the kingdom at the time, were compensated for their work in a similar manner, and trained in a similar way. Lawyers and judges feature heavily amongst this staff, as do members of the long robe (the lawyers) do amongst the membership. Finally, privilege, precedent, and self-regulation (Ch. 5) shows the legal nature of how parliament considered and protected its place within the constitution vis-à-vis other courts and institutions, being not just the representative gathering of the commons, lords, and church of the kingdom, but particularly as the supreme court of the kingdom.

Q2: What inspired you to take up this project?

I’ve been working on parliamentary history for some time now, and I think what caught my eye more than anything was that the official record of parliament, the journals of the upper and lower houses, betrayed a business-record and run of activity that suggested it was an institution well-aware of its place within the Irish constitution and the administrative complex of the Irish kingdom. With that in mind, I wanted to explore this side of parliament and understand the nature of the judicial and administrative functions of parliament.

Q3: Whose work was influential on you throughout the course of the project?

The list is long and not easily compiled. From perspective of the Irish parliament, I would have to say that the work of H.G. Richardson and G.O. Sayles on the medieval institution is excellent. They researched and wrote as a team, and produced a sophisticated literature on the Irish parliament (and the English one too) and also on other administrative institutions that made up the medieval state. They placed parliament within that administrative infrastructure and I would very much like to feel that I am following in that tradition. Their tone to other historians could be acerbic at times, but the quality of work, much written in the 1940s and 50s, very much stands the test of time. There are plenty of others that worked in this tradition of Irish institutional history, such as David Hayton, DB Quinn, Steven Ellis, Paul Brand, and Geoffrey Hand, all of whom were guiding lights. Internationally, I’m very fond of the work of Helli Koenigsberger, Antonio Marongiu, and working on England specifically, Sir Geoffrey Elton, MAR Graves, and Elizabeth Read Foster. All of these, I think, really understood and promoted the idea of parliament as I am trying to write it.

Q4: What challenges did you face in writing the book?

I think, probably, the greatest challenge was one of source material. Being a court-of-record, parliament kept official records, known as journals (separate series for each house). Whilst these were published in the eighteenth century and are still available to us, virtually all of the supporting documents – bills, private acts, petitions, counter-petitions, affidavits, writs, and warrants all burned in the catastrophic demolition of the Public Record Office of Ireland in 1922, at the start of the civil war. Whilst my history was possible, I couldn’t help but feel that I could have achieved so much more – a greater level of detail and a more sophisticated understanding of the institution and its role, had I access to those destroyed documents.

Other than that, I think it was not necessarily a challenge, but something to be careful of when dealing with the historiography of the Irish parliament in that it tended to consider the political institution. So, to a point, there was the necessity of keeping a distance from the established works and standing back a bit.

Q5: What do you hope to see as the book’s contribution to academic discourse and to constitutional or public law more broadly?

For me, I think re-thinking the position of the early modern Irish parliament in the Irish constitution is the main aim of the book. All too often in the modern popular imagination, both in regards to our current parliaments and to our past ones, we are too inclined to see them as primarily assemblies in which to play out political confrontation and dramas. Because the book places the Irish parliament firmly within the administrative and legal machinery of the constitution, it will help (I hope) to convince readers and other historians that it can be more than just a political event.

Well, I’m keeping busy over the next few years. Next up is an edited collection with the Irish Legal History Society on the nature of law and revolution in mid-seventeenth century Ireland. It’s quite a eclectic mix of electoral law, public law, high-constitutional concerns, and also martial law features prominently as you’d expect, as does human rights law – a lovely mix of international legal-historians, historians, and lawyers. I’m very pleased with it. This is currently with the publisher. I also have a non-legal history book that I’m co-editing with Robin Eagles on the 1st Earl of Arlington, Secretary of State for the South at a critical period, soon to be dispatched.

In the more medium term, I’m co-editing with Patrick Little a six-volume diary of the 2nd Earl of Cork / 1st Earl of Burlington, and I’m also starting to turn my mind to a history of crime and punishment in early modern Ireland, for which I’ve just recently signed a contract – as you can imagine, criminal law is probably amongst the least-sophisticated branch in the sixteenth and seventeenth century, so this will be dealing more with political and social policy concerns, although there will certainly be plenty of public and constitutional law in it in a tangential sense at least, as it concerns itself with the roll out of law into a colonial environment.

After that, I will return to the house of lords and write a book I’ve been promising myself for a few years and for which I’ve done much of the research, on the appellate functions (almost all equity appeals) of the both the Irish and the English house of lords from the early seventeenth century to the mid-eighteenth century. As always, there’s plenty of articles and chapters on the ‘to do’ list on the back of my office door, so I’ll not get bored!

Dr Coleman A. Dennehy was educated at University College Dublin in both law and history. Currently at the University of Limerick, he former taught at University College London, and has spent time in recent years teaching at the Faculty of Law at the University of Vienna. An IRC Marie Skłodowska Curie fellow, he spent part of 2017 as a visiting researcher at Das Max-Planck-Institut für europäische Rechtsgeschichte in Frankfurt. He is the Reviews Editor for Parlements, États & Représentation, is 2nd Secretary-General of the International Commission for the History of Representative & Parliamentary Institutions, and is also a Councillor of the Irish Legal History Society.