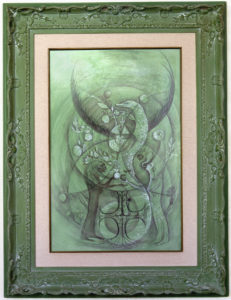 In 1972 Leonora Carrington designed a poster for the woman’s liberation movement in Mexico City, Mujeres conciencia (Women’s Awareness). Having previously written her own feminist position statement, “Female Human Animal” (also known as “What is a Woman?”), two years prior, the poster consolidated a feminist stance on environmental issues. As she writes in the earlier statement

“If all the Women of the world decide to control the population, to refuse war, to refuse discrimination of Sex or Race and thus force men to allow life to survive on this planet, that would be a miracle indeed” (1998:374; 2008:12-13).

Such miracles were anything but inconceivable for Leonora Carrington (1917-2011). As the nonagenarian protagonist of her novel The Hearing Trumpet (1976) puts it with characteristic matter-of-factness, “miracles can happen and very often do happen.” A similar matter-of-factness characterizes her approach to feminism. Her 1972 essay rewrites the category of “artist”—or “woman artist”—as “female-human-animal” to refuse even the categorical discrimination among species—and subtly to distance herself from the violent anthropocentric self-assurance of so-called civilisation. In doing so “Female Human Animal” presents Carrington as a trailblazer for ecofeminism, querying gendered positions within an ecological context: at stake in conciencia are the relations of power that affect animal, vegetable, and mineral life on the planet. Her early commitment to the Women’s Liberation Movement in Mexico City has provided fertile ground for feminist interpretations of her work for the past half century. Angela Carter, among other revisionary writers, was particularly struck by Carrington’s “unconventional brand of feminism” (1991:30), perhaps one of the principal lures of Carrington’s aesthetic universe.

Carrington’s interests and political stance speak to the contemporary moment in numerous and pressing ways, one of the major theoretical currents our essay volume of 2017 sought to investigate. In an era whereby the survival of life on this planet is becoming ever more precarious, current political thinking is only just beginning to catch up with her.

Carrington’s Mujeres conciencia poster features a double Eve, each of the paired figures presenting the other with an apple: a reciprocal gift of wisdom. A winged form soars above a lunar eclipse. Meanwhile, the interlocking, ermine-like serpent offers a palimpsest that actively rewrites the myth of original sin as a transfer of sacred wisdom between Eve and the plumed serpent god Quetzalcoatl; the Mujeres conciencia image depicts a more contemporary transfer of knowledge between and among women. Such redemptive retellings of patriarchal myths occur throughout her artistic career; in The Hearing Trumpet, for instance, Carrington reformulates the Bible, medieval romance, and the legend of the Holy Grail in an apocalyptic tale of planetary upheaval that is no less matter-of-fact for its depiction of the global overthrow of patriarchal systems (see Suleiman 1990). Mujeres conciencia is a work of agit-prop toward this global overthrow: yet it is a call not to violence but to awareness. In this image the fruit, no longer forbidden, constitutes an organic and bountiful harvest of knowledge and life. Consistent with Carrington’s known interests in the belief-systems of many cultures, here the tree of knowledge is both crucifix and ankh, symbolically reinforcing the iconography of life and the intersection of sacred and earthly realms. As can be seen from her broader iconography of this era, she also utilizes the imagery of pre-Columbian religion to access alternative belief systems. Concentric and spiralling motifs recast the picture plane of male-dominated linear perspective as a field of recursion, and would become typical motifs within her design-work in the form of tapestries. Angela Carter may have been skeptical of mythological perceptions of “Mother Earth” (1979/2006: 6) but here Carrington refocuses an interest in alchemy and sacred rituals to overturn patriarchal myth-making toward an ideology of shared knowledge and, in particular, a divestment from anthropocentric ideas about individualism, supremacy, and domination

The poster design Mujeres conciencia is based on a gouache painting which was found by Tere Arcq and recently included at a retrospective exhibition in New York city by the Gallery Wendi Norris, entitled Leonora Carrington: The Story of the Last Egg (23 May – 29 June 2019). On the back of the painting, the artist left the following inscription:

rises again in the tree of life where

Eve gives Eve back the fruit

Women take back the original wisdom.

In her call for women to “take back the original wisdom,” Carrington was engaging in both a struggle for epistemological change and, perhaps most of all, an understanding of feminism that sought justice for all—the living networks of earthly life—in its call for conciencia.

Leonora Carrington and the international avant-garde. edited by Jonathan P. Eburne and Catriona McAra, is available to buy now.