What do Rihanna, Janelle Monáe and the futurists have in common? A belief in the future and in the aesthetic and political power of technology, argues Katia Pizzi, author of Italian futurism and the machine, recently published by Manchester University Press.

After the end of the First World War, the Italian avant-garde splintered into competing clusters of artists, many of whom dispersed across Europe. A firm belief in the machine continued to glue these groups and individuals together. Take, for example, Ivo Pannaggi. A visual artist trained at the Bauhaus and a fan of biomechanics, Pannaggi left Italy at the onset of the fascist rule to become an architect and metalworker in Oslo. His Moscow-born collaborator Vinicio Paladini took his Marxist loyalty to machines to the US, until McCarthy’s communist witch-hunt had him repatriated to Italy. Fortunato Depero sought to break the inflexible techno-capitalist logic of the North American art market, returning to his Alpine workshop twice defeated. Giannina Censi’s technologized body, the site of a unique experiment in ballet history, ended up showcasing fascism’s reproductive demographic policies; to name but a few.

Industrialisation came late to Italy. Wyndham Lewis’s disparaging comments on Italian automobile fever capture something of the material and symbolic attraction for machines and industrial cultures running high in Italy and across Europe in the 1920s and 1930s. In Paris peasant (1926), one of the central works of surrealism, Louis Aragon emphatically declared: it is the machine that shapes modern life. Machines may be tools in the factory, freedom and class fighters alongside the workers. Machines may serve body-political purposes, as is mirrored in Busby Berkeley’s clockwork chorines and, more recently, and for entirely different purposes, Donna Haraway’s cyborg feminism. Machines may be fetishes, symbols and cyphers: witness Marinetti’s ‘electric’ copulations on the one hand, and Ernst Cassirer’s ‘symbolic forms’ on the other. Machines frequently pose threatening future scenarios, from robotic totalitarianism to AIs challenging the boundary between human and artificial.

For Afrofuturism, machines are empowering symbols of future. Already circulating since the 1950s, the term Afrofuturism was coined by Mark Dery in an influential essay of 1994 entitled ‘Black to the future’. Dery posited Afro-American culture as constitutionally ‘Afrofuturist’ in the context of the colonial erasure of African pasts. Afrofuturism addresses the concerns of the African diaspora through the lens of techno-culture and science fiction. Women’s empowerment, alienation and otherness of racialised bodies in the African diaspora are recurrent themes. Afrofuturism encompasses fiction (e.g. Samuel R. Delany and Octavia Butler), painting (e.g. Jean-Michel Basquiat, Angelbert Metoyer, and Wangechi Mutu), and photography (e.g. Renée Cox).

Music is a particularly creative field. Afrocentric themes and the space age co-exist in Sun Ra’s musical syntheses. Before dying in 1993, Sun Ra performed in full space regalia in Oakland in the 1970s together with the group Arkestra. George Clinton’s ‘certified Afronaut’ bands Parliament and Funkadelic emerged in 1975. Other musicians working under the Afrofuturist rubric include Lee ‘Scratch’ Perry, Afrika Bambaata, Jeff Mills, Newcleus and, more recently, Solange Knowles, Rihanna and Beyoncé. Beyoncé’s film Lemonade (2016) starred Serena Williams as an example of the empowerment of black women. Influenced by Metropolis, Blade Runner, and Star Wars, Janelle Monáe’s contemporary urban music embraces Afrofuturism in works such as Prime Time and Many Moons. Here, Monáe uses fashion, metal and the cyborg to explore slavery.

Machine technology has preoccupied humans since the dawn of time. If Plato and Aristotle disparaged mechanics and technicians in a bid to promote abstract thinking, the modern age hinged on the mechanical thinking of Newton, Leonardo and Descartes. Four Industrial Revolutions have since established machines as human companions. Afrofuturism may be the latest but is not the last manifestation of the enduring power of machines across the ages. Machines continue to live alongside us, against us, inside us. 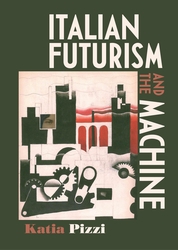 Katia Pizzi is Senior Lecturer in Italian Studies at the Institute of Modern Languages Research, School of Advanced Study, University of London.

Italian futurism and the machine is available to buy now.