I hope they would say something like: “In some cases, white atheists and freethinkers seemed to accept common notions of racial and civilizational superiority, yet in other cases the marginalization they experienced also allowed them to question and even reject these same ideas.”

There are many, but Colin Kidd’s The Forging of Races: Race and Scripture in the Protestant Atlantic World, 1600-2000 (2006) comes immediately to mind. Colin would eventually supervise my PhD thesis, but I had read his book before I knew he would be my supervisor, and I found it to be quite brilliant.

Not unexpected per se, but I was fortunate to visit major libraries like the British Library in London and the Library of Congress in Washington, DC, as well as specialist freethought libraries like Conway Hall Library and the Bishopsgate Institute in London, and the Center for Inquiry Library in Amherst, NY.

Just on the computer, although I usually write notes by hand.

MUP had recently published some books that covered both the history of race and racism, as well as the history of atheism and secularism, for example, Douglas Lorimer’s Science, Race Relations and Resistance: Britain, 1870-1914 (2013) and Laura Schwartz’s Infidel Feminism: Secularism, Religion and Women’s Emancipation, England 1830-1914 (2011). I thought therefore that MUP would be a great publisher since my work combines both of those themes.

Probably to buy a better camera for taking photos at libraries!

Maybe Richard Dawkins’s The God Delusion! This made a big impact on the popular conversation about religion – for better or worse depending on your perspective!

Aside from history, I’m interested in reading about science, philosophy, or sports. I hope one day to get back into reading novels too!

This is a difficult question and obviously there are many. To make it easier for me, I will choose some of the people I talk about in my book. Perhaps John Stuart Mill, Annie Besant, W.E.B. Du Bois, Charles Darwin, Robert Ingersoll… the list goes on. 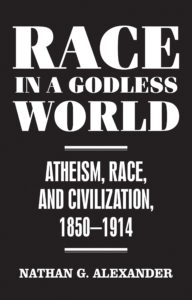 Race in a Godless World is available to buy now. Nathan G. Alexander is a Postdoctoral Fellow at the Max Weber Centre for Advanced Cultural and Social Studies, University of Erfurt, Germany.