This is the most significant book on the Vietnam War that has been written in a long time.

Origins of Totalitarianism by Hannah Arendt

It led me to completely change my view of the nature of the war and the role of the South Vietnamese.

Because its series on modern warfare and culture is a good match for the book, which is trying to be at once a work of original historical research, cultural criticism and critical theory.

I am working on a book on the influence of the Vietnamese Marxist philosopher Tran Duc Thảo on French philosophy (Derrida, Althusser and Foucault), and another book on the impact of automation on racial politics in America.

I sincerely believe that the book is the book that it is only because of the all unforeseen problems I encountered while writing it, and so there is no advice I could have given myself.

Society of the Spectacle by Guy Debord because it is an important work of critical theory that is both rigorous and poetic, and because its brilliance defies academic convention and classification. 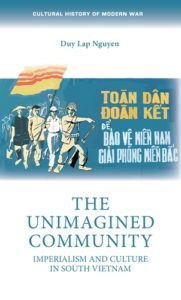 The unimagined community is available to pre-order now! Duy Lap Nguyen is Assistant Professor at the University of Houston.