This book puts flesh on the bones of slavery’s economic history – it is both an intimate family story and a lens through which we can understand how the system functioned and some of the legacies it left behind.

From academic history Leonore Davidoff and Catherine Hall, Family Fortunes: Men and Women of the English Middle Class 1780-1850 (1987) and from popular history Andrea Stuart, Sugar in the Blood: A Family’s Story of Slavery and Empire (2012).

It took me on a transatlantic journey from Britain to Jamaica and America. It also brought me to numerous local archives. This underscores the ways in which slavery penetrated into unexpected areas – largely through family networks and also as a result of country house investment. One of the more surprising discoveries was that George Hibbert lived on Clapham Common opposite his political opponent William Wilberforce. A map from 1800 in the collection at Lambeth Archives showed how slave-owners and abolitionists lived side-by-side in the area.

I write at home in my office with my laptop (and numerous cups of tea).

The Hibberts were originally a Manchester family – their merchant house was a fifteen minute walk from the MUP offices. The connection of place seemed fitting for a book which engages closely with local history. I wanted to be part of the ‘Studies in Imperialism’ series because of its approach to the cultural history of empire which focuses on the ways in which the metropole was reshaped by colonialism.

Based on the Hibberts’s cultural consumption I curated an exhibition ‘Slavery, Culture and Collecting’ at the Museum of London, Docklands. My next project brings together some of the fascinating research which is being produced by academics and public historians on the links between slavery and Britain’s cultural institutions and collections.

That it is going to take much longer than you think but that is alright because your thinking will change and deepen over time. The end result will be better given some distance between the thesis and the book.

Jeanette Winterson, Written on the Body (1992). To be able to craft such achingly beautiful sentences which summon the full spectrum of emotions is a gift.

Historical fiction – it offers a way into the past, particularly for marginalised historical subjects, which gives voice to the interior world of thought and emotion. The things the sources can’t always tell you. 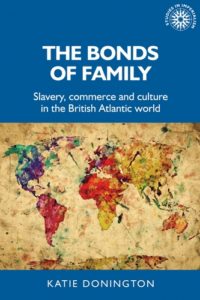 The bonds of family is available now. Katie Donington is Lecturer in History at London South Bank University.