It’s so hard to pick one; there are the books that have inspired and shaped how I think about the French Revolution in particular, but equally important have been the books that help me to formulate questions and to think about how I might stumble towards my own arguments or analyses. Among the former, Michael Fitzsimmons’ The Remaking of France (Cambridge, 1994) and Timothy Tackett’s Becoming a Revolutionary (Princeton, 1996) have been particularly important in shaping my sense of the early years of the Revolution. Among the latter, I find that Michel de Certeau’s The Practice of Everyday Life (California, 1984) and Reinhart Koselleck’s Futures Past (Columbia, 1985) come quickly to mind when it’s time to pose specific questions and to think about what answers might look like.

My trip to the archives of the Institut national de recherche pédagogique was unexpected, not because of the archives’ holdings, which were obviously relevant to the work, but because of its location. The research center is something of an annex to the INRP’s museum in Rouen, but the archives themselves are located in the small town of Mont Saint-Aignan (pop. 20,000). The archivists were incredibly helpful and the materials were great, but the building resembled a barn more than it did any of the other archives I visited. The first day I visited, I stood in the field between the road and the building wondering if I’d somehow gotten myself lost.

As the book took shape, I focused more and more on how the people about whom I was writing had worked to find their place in and to navigate the tumultuous world of the Revolution, to give shape and purpose to a politics they could neither control nor fully understand. That (perhaps obvious) reminder became central to my arguments, but it also proved a source of great humanistic pleasure; I was humbled, intrigued, and inspired by their efforts and by their ambitions.

As we hear so often, I struggled with what could be left out and with where to stop the story, where to draw a line and hazard some conclusions. I also found it hard to embrace a clearly “authorial” voice; there’s so much going on in the Revolution, and the debates over education were interwoven with so many complicating factors and concerns, it was difficult to relinquish the role of tour guide, emphasizing what I found interesting, for the more direct voice of analyst, arguing that readers should see those things as I do.

This is my first.

For me it was the proofs. Seeing the work in a format I had not generated somehow made the work more real. It was an immensely gratifying moment.

I found my way to MUP through the UK Society for the Study of French History. Their annual conferences are so good, as is their journal, French History; when I learned that the Studies in Modern French and Francophone History series brought together the SSFH and MUP, it seemed like an ideal home for my manuscript. That sense has certainly been borne out; working with MUP has been a great pleasure, beginning to end.

Since this was my first book, both the process and the purpose were quite unlike my earlier work (articles). I wrestled with how to structure the work and how to sustain a line of analysis across the broader landscape of a monograph. But I also enjoyed the freedom that the additional space offered, as it allowed me to step back and take stock of where the many constituent threads of this story encountered and became entangled with one another.

Since In pursuit of politics came out, I’ve published a number of articles, some of which grew out of that book, and others of which are related to my next book project, tentatively entitled Regeneration and Revolution in France, 1789-1791. 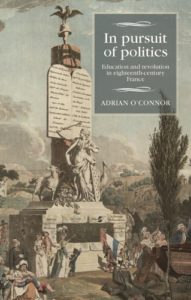 In pursuit of politics is available now. Adrian O’Connor is Associate Professor of History at the University of South Florida St. Petersburg.