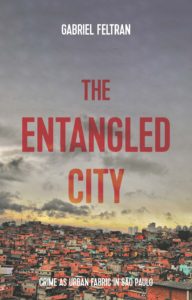 This book makes me feel close to the characters it presents, even if these characters are completely alien to my world. After reading it I think that violence is not something that comes from the poor, from the South or from our enemies. The borders between them and us produce violence every day. They frame a very narrow world in which violence turns into a coherent and plausible act. Our contemporary intellectual, political and material borders produce crime, terror and violence.

Yes, to many unexpected places. From the poorer Rehab Clinic for drug addicts in São Paulo’s East end, to the richest Insurance Company in the City of London. From dark prison cells to the richest universities all over the world. From São Paulo’s crackland to the Gorlitzer Park in Berlin. From funerals to births, from bike rides to international airports. The research I presented in this book is not only about São Paulo. It started in São Paulo.

Normally I dictate my fieldnotes to the cell phone, and I listen to them all for hours, before writing a paper. It makes me have the idea of the theme, the specific situations and the characters I would use. After that, it is about writing for whole days in front of a computer. The planned summary always change a lot, but normally it turns into a better one.

Because MUP is a great Publisher House and Talja Blokland introduced me to Tom Dark. When we first met, I felt he was a wonderful editor and person. He really was. I am deeply honoured to be part of the MUP authors’ team.

I am working in a book called Stolen Cars. It presents a collective and ethnographic research, which lasted for five years. In this book, we reconstruct the trajectories of five stolen cars. Different stolen cars goes to different places: they can be exchanged by drugs and guns in the border Brazil-Bolivia. They can be used in robberies, or dismantled in junkyards. Different people work in those different circuits, bridging criminal and legal markets, transforming very poor into very rich economic circuits. This will be a book about situated urban inequalities and global (il)legal markets.

I began my fieldwork in Sapopemba in 2004, trying to understand why there was no social movement related to homicides in São Paulo’s favelas. We could identify strong health and housing movements, some unions and a social rights grassrooted struggle. But a lot of young men were being killed and I couldn’t see any human rights movement. After many years I realized that while I was searching for a standard political movement, people was talking to me about the “debates” PCC conducted in São Paulo’s favelas. I could not link both things, I did not understand these “debates” were targeting exactly the homicide issue. I present this idea in the book. If I could go back, I would advise me to pay much more attention to what people was telling me, in instead of trying to find my own projects in their mouths.

The Aleph, from Jorge Luis Borges. Because “Biografía de Tadeo Isidoro Cruz” is probably the greatest piece I have ever read. It could be seen as a theoretical essay about comprehension, but it uses nothing more than the narrative form. It perfectly communicates how a life story can teach you about the world around you. It refers to an entire literature tradition without being boring. And it is so beautiful!

I love to read poetry, biographies and literature, but academic and political life have been so rude last years in Brazil… we couldn’t do much what we like. We had to act every minute trying to preserve some academic freedom and what people call democratic institutions. Despite our collective struggles, the political situation is now very tough and getting worse.

I really don’t think authors are the best people to invite if you are keen to party! At the same time, I think Georg Simmel should be fun!

The entangled city: Crime as urban fabric in São Paulo is available to buy now.

Gabriel Feltran is Professor at the Department of Sociology of the Federal University of São Carlos, Scientific Director of the Centre for Metropolitan Studies (CEM, São Paulo) and researcher at the Centre for Urban Ethnography at the Brazilian Centre for Analysis and Planning (CEBRAP)