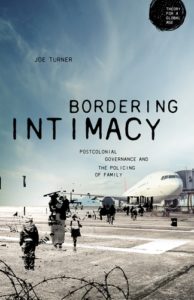 An engaging text that helps us think differently about the work that naturalised ideas of family play in the contemporary structure of borders, racism and colonial rule.

Anne McClintock’s Imperial Leather. This book fundamentally changed the way I thought about the relationship between gender, colonialism and racialised power (or more accurately forced me to consider how intertwined they were). It is also an eminently readable text. Re-reading it has constantly challenged me to be a better writer.

The depths of the colonial archives. There are times when I was so occupied reading dusty handwritten memos or studying family photo albums that I forgot whether it was day or night. When I started the project I also didn’t expect to engage so much with photography or exhibitions. That has been a fruitful and creative line of research.

I normally use a trusty desktop, ideally with the internet disabled. However, in the midst of the book project I turned back to writing sections of chapters in notebooks. Before becoming increasingly paranoid about losing them…

I was attracted by the Theory for a Global Age series. I know the series well and it has provided a forum for interdisciplinary debate with a strong emphasis on postcolonial approaches. The cover art is nice as well.

I have several new projects on the go. They examine: how borders are being justified by environmental discourses (with Dr Dan Bailey), how borders are related to colonial policing (a solo project) and how border control is changing in the English Channel in the shadow of Brexit (with Dr Lucy Mayblin, Dr Arshad Isakjee, Dr Thom Davies). I am currently in the middle of writing a co-authored book with Dr Lucy Mayblin which looks at how we can/should study migration after colonialism.

Get up to speed with the British Library and National Archives cataloguing system – once a document has gone back into the archives it can be surprisingly tricky to find it again!

Ignoring the unique structural, social and intimate circumstances that produce a book… I have found Silvia Federici’s Caliban and the Witch endlessly insightful. It remains a powerful and historically rich study of inequality and the production of gendered and racialised categories. It also manages to be a book about political economy for people like me who don’t normally read ‘political economy’. It doesn’t appear on enough politics and international relations reading lists.

The last non-fiction book I read was Ken Miller’s Augustown which is extremely timely and provides more vital political insights than most academic books. I have also been enjoying dystopian science fiction recently, particular José Saramago’s work, and Jenny Hval’s debut novel. Although given the state of the world it too often feels like life is imitating art.

Bordering intimacy: Postcolonial governance and the policing of family is available to buy now.