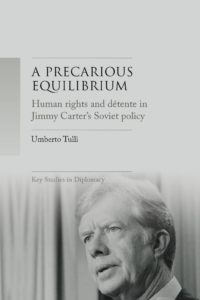 A comprehensive assessment of how human rights emerged in American foreign policy, shaped it, and intertwined with the Cold War and bipolar détente.

Yes, to the archives of the International Olympic Committee in Lausanne and to the Center for Jewish History of New York.

Mostly for the reputation of the Key Studies in Diplomacy series.

The EEC and the human rights breakthrough of the 1970s and 1980s. The aim of the research is twofold. First, it aims at understanding whether the EEC (its Member States, supranational institutions, and some ‘transnational players’ with strong links to the EEC played a major role for the emergence of human rights. Second, it wants to study whether the global surge for human rights shaped and modified European integration.

Learn German. There are so many German books and articles that could enrich my research.

Roald Dahl, Lewis Carroll and Carlo Collodi: I grew up reading their books.

A precarious equilibrium: Human rights and détente in Jimmy Carter’s Soviet policy by Umberto Tulli is available to buy now.