From the Foundational Economy Collective[1] 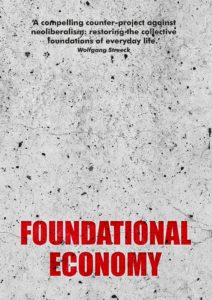 What comes after the pandemic when the public health emergency is over?

Across Europe for the past thirty years we have had an ongoing crisis of social cohesion. Increasing income and wealth inequalities have done real economic harm, feeding political mistrust of elites, fragmenting political parties and creating electoral volatility.

Against this background the foundational economy collective has argued that policy makers must pay more attention to essential goods and services like housing, utility supply, health, education and care. This foundational economy of branches and networks provides the infrastructure of everyday life. It serves our essential daily household needs, and keeps us all safe and civilised. It is the part of the economy which cannot be shut down.

The pandemic demonstrates its vital importance. The list of essential workers in the current lockdown provides a common sense and practical definition of what counts as foundational. Ordinary service workers reliably perform essential social tasks with an uncomplaining sense of duty. Nurses in intensive care units and the ill paid assistants in care homes are front line heroes. Supermarket delivery drivers are recognised as critical workers.

But public gratitude is often short-lived and many employers cannot afford to act on sentiment. So, the big question is whether we return to business as usual after the crisis. The collapse of Lehman Brothers in 2008 led to a chorus of journalists announcing that financialised capitalism would be utterly changed. But a few years later very little had changed.

We must use the crisis actively as a lever to make the case for foundational provision and the value of collective consumption. Not simply economic infrastructure renewal but broader programmes focused on social protections and provisions which are the infrastructure of well-being.

After the war in 1945, the Labour Government built a new social settlement with educational reform, free hospitalisation under the NHS, extended social insurance and large-scale construction of social housing including new towns. It was planned and publicised in war time as soon as the immediate threat of invasion was over. The Beveridge plan was published in 1942 and sold 100,000 copies within a month.

Part of the British war effort was working out an ambitious national plan to abolish want and poverty. In the midst of crisis, it gave hope and motivation to beleaguered citizens. In the middle of the Covid-19 crisis, it is important to think through what we mean by better foundational provision so that we do not return to the same old business models which have failed us socially and environmentally.

When the pandemic is over, we need to rebalance away from the tradeable and competitive economy towards the mainly sheltered foundational economy producing daily essential goods and services which underpin liveability and sustainability. And, equally, accept that the financialised business models of public companies and private equity funds are an extractive intrusion on foundational activities which should offer modest, steady returns on long term investment.

Government will play a leading role in crisis provisioning. Business will behave cooperatively. But the quality of life for most of us will then depend on civil society and the effectiveness of local community solidarity as we “look out for each other” in the often overlooked, everyday activities that fill our days.

We need a positive vision of a different set of priorities which embody these solidaristic values in material systems that underpin collective foundational provision. And we need to turn it into a programme of action.

The ten points below are an outline of the vision.

The ten points are all practical ones which could be taken up by politicians, interest groups and civil society activists. But they also raise serious intellectual issues for academics and others who want to analyse underlying issues. One issue is that our financialised foundational economy is being run without slack or excess capacity. This is done to facilitate value extraction in the case of the private/outsourced foundational economy. In the publicly-owned foundational economy it is done to try and mimic inappropriate corporate norms of ‘efficiency’.

The human consequences for casualised workers and underserved users have been apparent for some time. But, as the pandemic crisis shows, efficiency without reserve capacity embeds systemic fragility and vulnerability in our foundational infrastructures, such that they cannot deal with the unexpected. The implication is not only that certain sections of the economy are not suited to marketable provision; but also, that we need a new and different way of thinking about what effectiveness, efficiency or ‘value for money’ looks like.

Unorthodox economic policies are being generally applauded right now by left, centre and right: the UK’s 80% wage replacement was “economically and morally the right thing to do” according to an FT op ed piece. But dissent will grow as the costs of lockdown increase.

When it comes to exit strategy, expect a “can’t pay, won’t pay” counter-offensive from the economic right. The argument will be that this pandemic is not a disorder of the markets or a failure of capitalism but a one-off health emergency, which has already cost quite enough so that it is time to reinstate sound finance, small government and the primacy of markets. They will promise the market and we will get more financialised capitalism and austerity.

We need to anticipate this reactionary response and step forward with progressive argument and organization. The argument is that democratic government only gains political consent through an implicit social contract whereby it guarantees some basic forms of protection for their citizenry. In the last few decades this protection has been eroding and the Covi-19 epidemic exposes the neglect, dysfunction and failings of the old order. As for organization we need a broad-based alliance for change united around a platform of demands and priorities. Wherever we are, we can get started now, in the middle of the pandemic crisis, on planning concrete improvements in the reliance systems that underpin our everyday life.

[1] A longer version of this document is free to download from https://foundationaleconomy.com/covid-19-report/