A Fistful of Shells by Toby Green. You can’t write Atlantic history and ignore Africa.

National Archives of St Lucia. It’s a ten minute walk in the sunshine from the regional airport and they have an Enigma machine on the veranda.

I’m quite high tech. I make heavy use of relational databases to make connections between people, accounts software to straighten out early modern payments and receipts and Transkribus, an AI utility, to search digital images of manuscripts for the connections I am trying to make. I tend to make vectors of information and then write them up. I then rewrite it. And then a few more times.

Our head of department at History in Trinity College Dublin, Micheál Ó Siochrú, is series co-editor for Studies in early modern Irish History. Micheál guided me through the process.

I am Archival Discovery Lead for Beyond 2022, Ireland’s virtual record treasury. The aim of the project is to reconstruct the Public Record Office of Ireland, destroyed in 1922, using digital surrogates and present it as an immersive 3D experience. My role involves searching libraries and archives around the world for copies that were made of Irish records before their destruction. For an historian, it’s probably the best job in the world. In the background, I am pulling together resources for a sequel, Empire and Enterprise Strike Back (the title needs some refinement).

Block out decent chunks of time for the first and second drafts. The research can be done by grabbing a few hours or days at a time and working away at it over time, but writing requires a concentrated effort.

A work of historical fiction based on the same research I used for my scholarly monograph. Those things sell in the millions.

I was an early adopter of Hunter S Thompson and enjoyed that style of spiky narrative journalism. I enjoy his successor at Rolling Stone, Matt Taibbi, just as much. Political satire is a lot of fun, especially when it turns out to be prescient. I strongly recommend comparing Al Franken’s Why Not Me? with Taibbi’s Insane Clown President.

Michael Lewis as he always has something interesting to say, and Hannah Fry for the same reason. John Adamson and Hilary Mantel. 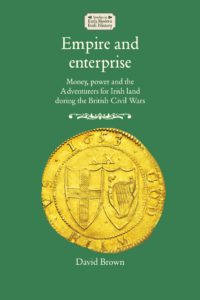 Empire and enterprise is available now, read more about the book and a sample chapter here. David Brown is a research fellow at the Department of History, Trinity College Dublin.