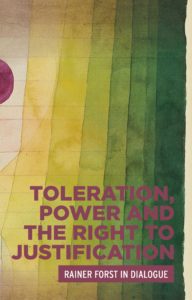 By critically examining Rainer Forst’s critical theory of toleration and power, this book sheds light on the multiple aspects of the question of toleration in our time.

Yes, it did. I had not intended to write a huge tract (my 2003 German /2013 Cambridge UP book on toleration) on the history of toleration. But once I started looking into the history, more and more fascinating theories and aspects appeared. And more work of analysis and synthesis piled up. For the MUP book, the unexpected was, of course, personified by my great critics. The best people in the field.

I was lucky enough to be included in the Critical Powers series, which is superb. My second book in it.

As I tried to do – listen to my critics.

Kant’s Groundwork – because then I would be Kant.

Those who are no longer with us – wish I could have John Rawls and Ronald Dworkin back.

Rainer Forst is Professor of Political Theory and Philosophy at Goethe University, Frankfurt and Co-Director of the Research Institute ‘The Formation of Normative Orders’