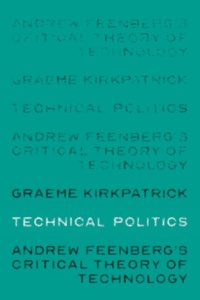 It presents an original critique of an important contemporary philosopher, taking the reader from the idea of democratising technology to the, arguably more radical notion of ‘technologically authorised socialism’; from critical theory of technology to utopian politics of civilizational change.

Andrew Feenberg’s Critical Theory of Technology was the starting point for my book. In it he set out the idea of ‘Technical Politics’, which I’ve taken it upon myself to develop in a slightly different direction. Without his radicalisation of social constructivism I would probably be in the same place as most ‘critical theorists’: bemoaning technology’s ambivalence without trying to think through the multi-layered social and political processes involved in changing it. In later books Feenberg finesses what he comes to call ‘critical constructivism’ but the main ideas: of formal bias in technology design; of instrumentalization theory as an alternative to essentialising definitions of technology; and of ‘technical politics’ itself, are all set out very clearly in this inspirational work.

I became interested in how technical activities are standing in for political ones in contemporary society. I came across some interesting examples, like ‘Universal Automation’, a program some anarchists wrote to automate job applications for people on JSA, for example. It’s a philosophy book, though, so the main ‘breakthroughs’ (if that’s what they are) are conceptual. I was surprised to find that the main limitation on Feenberg’s project – the horizon he can’t pass beyond – is set by the idea of critique itself. I retrieved an old opposition between critique and utopia and combined this with newer ideas about technological agency to come up with the idea of technologically authorised socialism.

I use a lot of longhand notes – several notebooks filled with scribbled ideas and responses to what I’ve read – and then make plans. Then I move to the computer when an idea seems to have taken shape, normally with the idea of writing a section or trying to set out an argument, and see what happens. The result is rarely exactly as I planned it and so I end up moving back and forth between thinking and scribbling and trying again with the on-screen version. It can be quite tortuous!

In my experience, the Press has a supportive, informal ethos which I find conducive to intellectual work. I’ve had good experiences with them in the past and enjoyed working with the people there, especially Caroline Wintersgill, who worked with me on my first book (with another publisher), and Matthew Frost who was my editor when I wrote my most successful book, Aesthetic Theory & the Video Game. This time I had a different editor, Alun Richards, and the experience was again very good. I always wanted to publish with them because some of my favourite books when I was a student had the Manchester imprint.

I’ve started a big project on the history of critique as a ‘figure of thought’. This was inspired by reading a lecture Michel Foucault gave in 1978, in which he asked some very interesting questions that he never came back to. I don’t think critique has run its course, as some of the big names in French theory have suggested, but it does seem to have entered a new configuration in which it has a different, more limited role to play. I think there are dangers and possibilities associated with this but to see what they are we need a stronger sense of where (and what) critique has been in the past.

I would remind myself of Jacob Burckhardt’s comment that history makes us wiser but not how to be more shrewd next time.

Black Athena (Martin Bernal) because it demolished one of the engine rooms of racist prejudice in academia and because its impact on scholarly work has been both unambiguously positive and, perhaps uniquely, tangible. Black Athena inaugurated a paradigm shift the ramifications of which are still unfolding decades later.

I like books with pictures, especially art books and graphic novels. I recently read a graphic novel adaptation of a story by Stefan Zweig, which really grabbed me. I enjoy reading anything my son writes, especially his reviews of gigs and festivals.